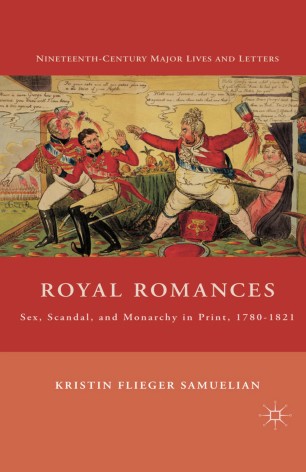 This text explores the reception of the royal family during the late eighteenth and early nineteenth centuries, and its representation in fiction, poetry, and the popular press. Samuelian finds that popular response to the royal family has reflected the public's belief in their right of access to the private life of royalty.

"Throughout Royal Romances, Samuelian makes excellent connections between literary texts, representations from the popular press, and the crises in the royal family. She reveals a conflict-filled series of adjustments as the press, the public, and the royals themselves contended with 'the public privacy of monarchy' (178). At the end of this engrossing study, Samuelian also hints persuasively that she has revealed something more: the representational processes, conflicts, and strategies inherited by the kings, queens, and public who followed the Georges." - Michael Wiley, The Wordsworth Circle

'Samuelian's elegantly-structured study examines topics of perpetual public fascination, namely, royalty, madness, and sex, around the time of the Queen Caroline affair. The romances of princes and princess may be the stock material of fairy tales, but in what is now known (ironically enough in this case) as the Romantic era, living happily ever after proves to be located in the realm of the imagination rather than in the scandalous lives of an actual royal family . . . Anyone interested in Romantic-era print culture and the rise of the novel will enjoy the clear narrative and expertly-researched details of this book, while royalty-watchers may find intriguing parallels with the representation of monarchy and its public and private behavior today.' - Clare A. Simmons, The Ohio State University

'In this impressively lucid and well-argued book, Samuelian draws on a wide range of sources poetry, pamphlets, prints, and both canonical and popular fiction to illuminate crucial shifts in the representations and meanings of monarchy during the reigns of George III and George IV . . . With an unerring eye for verbal and visual detail, a striking command of the historical context, and a nuanced approach to questions of representation, Samuelian makes the history of the monarchy central to Romantic-era textual and sexual politics in this fascinating analysis.' - Mary Jean Corbett, John W. Steube Professor of English and Affiliate of Women's Studies, Miami University

'Royal Romances offers a witty and eye-opening account of representations of royalty in the context of emerging celebrity culture. Samuelian lingers fascinatingly over how the private lives of the era's disreputable royals the Prince Regent and his estranged wife Caroline turned into a spectacle for public consumption.' - Kim Wheatley, Associate Professor of English, College of William and Mary