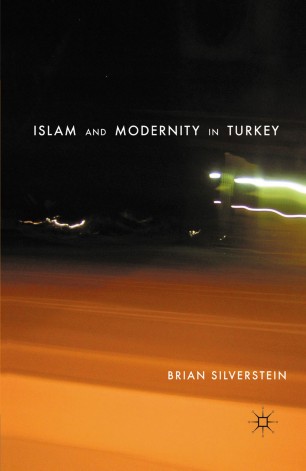 Islam and Modernity in Turkey

In contrast to much of the Muslim world, a majority of Turks consider Islam to be primarily a matter of personal choice and private belief. How did such an arrangement come about? Moreover, most observant Muslims in Turkey do not see such a conception and practice of Islam as illegitimate. Why not? Islam and Modernity in Turkey addresses these questions through an ethnographic study of Islamic discourses and practices and their articulation with mass media in Turkey, against the background of late Ottoman and early Republican precedents. This ground-breaking book sheds new light on issues of commensurability and difference in culture, religion, and history, and reformulates our understanding of Islam, secularism, and public life in Turkey, the Muslim world, and Europe.

BRIAN SILVERSTEIN Assistant Professor in the School of Anthropology at the University of Arizona, USA.

'Silverstein makes important connections between the contemporary activities of a religious community and deeper notions of political liberalism in the Turkish republic today. His work makes profound claims about political philosophy and intellectual life among contemporary Turkish Muslim scholars ... This original research shatters the typical conceptual divide between Islam and secularism, so common in research on the subject. Instead, we learn of the profound historical foundations of these domains and how intellectuals in Turkey have managed these constructions from the late Ottoman period onward.' - New Perspectives on Turkey

"The book presents an immense array of information about religious structures, practices, and experiences in Turkish society, and as such, it is most recommended as a valuable reference for students of Islam in Turkey." - American Anthropologist

"Brian Silverstein's ambitious Islam and Modernity in Turkey synthesizes recent research on history and social theory to 'diagnose the Turkish present' in order to make sense of the rather peculiar place, compared with other Muslim-majority societies, that Islam occupies in modern Turkish society. . .a brilliant piece of lucid scholarship in its synthetic originality and sophisticated grasp of scholarly concepts that indeed illuminate the topic. It is most recommended for scholars and graduate students of the modern Middle East and in anthropology concerned with the productive place of theory in social analysis and the provocative place of Turkey in today's world." - International Journal of Middle East Studies