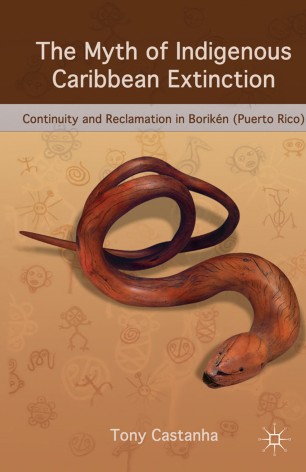 The Myth of Indigenous Caribbean Extinction

This book debunks one of the greatest myths ever told in Caribbean history: that the indigenous peoples who encountered a very lost Christopher Columbus are 'extinct.' Through the uncovering of recent ethnographical data, the author reveals extensive narratives of Jíbaro Indian resistance and cultural continuity on the island of Borikén.

TONY CASTANHA is Lecturer of Indigenous and American Indian Studies in the Department of Ethnic Studiesat Hawai'i Pacific University, USA.

"Castanha provides a valuable contribution to the ongoing arguments over the long-assumed extinction of the indigenous populations in Puerto Rico and elsewhere in the Caribbean... Original accounts from island jibaros and the historical accounts together support the position for indigenous survivals, and the work is an important counter-narrative to the dominant arguments. Recommended." - Choice

"The Myth of Indigenous Caribbean Extinction brings a clear voice to a Native perspective on Puerto Rican identity that previously has been unrepresented, misrepresented, and misunderstood. With solid research and insightful reflection, this book speaks to the Jibaro experience - the Indigenous people who survived being denigrated, romanticized, and written into the margins of Puerto Rican history. The story of their survival has implications for studies of race and nation in the Caribbean and throughout the Americas where the stamp of colonization has been met with subtle and complex forms of resistance." - Pedro Ferbel-Azcarate, Black Studies Department, Portland State University

'Born from a Puerto Rican mother, descendant from sugar plantation workers who emigrated to Hawai'i at the beginning of the twentieth century and raised in this Polynesian archepelago, Dr. Tony Castanha goes deep into the history of rebellion and resistance of the indigenous Jíbaro Native Americans in Borikén, true name of Puerto Rico. A controversial, radical history, also gathered from oral tradition and ancestral memory, affirms that the indigenous inhabitants were not extinguished by the Spaniards around mid-sixteen century. On the contrary, there was a cultural survival and continuity within native communities in the mountains that became the roots to the Puerto Rican national identity and the following movement for Independence in the nineteenth century. This book, a moving contribution to the Caribbean history, invites us to a magical voyage into spiritual ancestry, the clash of civilizations and the right to self determination for the people of Puerto Rico, a nation without sovereignty, the oldest colony in the western hemisphere.' Etnairis Rivera, Distinguished Puerto Rican Poet, Hispanic Literature Professor at Universidad de Puerto Rico