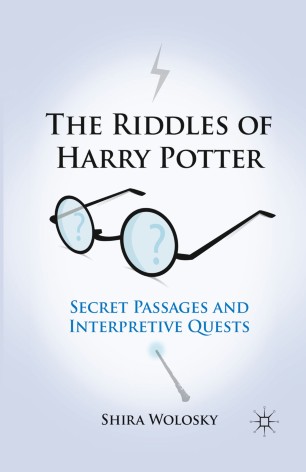 The Riddles of Harry Potter

The Riddles of Harry Potter draws readers into the deeper meanings of these phenomenally successful books, arguing that they launch and pursue interpretive quests in an ongoing effort to understand patterns and their attendant meanings, implications, and consequences.

SHIRA WOLOSKY is Professor of English and American Literature at the Hebrew University, Israel. She is the author of Emily Dickinson: A Voice of War; Language Mysticism; The Art of Poetry; and "Nineteenth Century American Poetry" in the Cambridge History of American Literature IV, among others.

'The Riddles of Harry Potter convincingly argues that Rowling's books are 'carefully crafted literary works, with many layers of meaning.' Wolosky is at her best when analyzing the structural devices and rich wordplay employed by Rowling to underpin the psychological development of her characters and to drive forward a plot that is a mixture of detective novel, teenage adventure, fantasy epic, and mythical morality tale.' - The Chronicle of Higher Education

'At last, an excellent book on Harry Potter! Untrammelled, direct, and illuminating, sophisticated without condescension, The Riddles of Harry Potter reminds readers why they liked the Potter saga in the first place. This book shows Rowling to be, in the best sense, a major writer: meticulously intelligent where she is most droll, engaged deeply with the British literary tradition, a careful ethicist and a sharp chronicler of the great dilemmas, great joys, and great horrors of daily life. Wolosky has written a work of crisp literary intelligence, marking Rowling's debts to Augustine, the Gnostic and Patristic traditions, and to contemporary popular culture. An energetic and subtle braid!' - Jacques Lezra, Professor of Spanish and Comparative Literature, New York University, USA