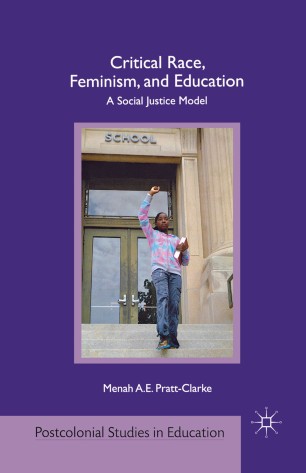 Part of the Postcolonial Studies in Education book series (PCSE)

Critical Race, Feminism, and Education: A Social Justice Model provides a transformative next step in the evolution of critical race and Black feminist scholarship. Focusing on praxis, the relationship between the construction of race, class, and gender categories and social justice outcomes is analyzed. An applied transdisciplinary model - integrating law, sociology, history, and social movement theory - demonstrates how marginalized groups are oppressed by ideologies of power and privilege in the legal system, the education system, and the media. Pratt-Clarke documents the effects of racism, patriarchy, classism, and nationalism on Black females and males in the single-sex school debate.

Menah A.E. Pratt-Clarke is Assistant Provost and Associate Director of the Office of Equal Opportunity and Access at the University of Illinois at Urbana-Champaign, USA.

"Menah Pratt-Clarke's study represents one of the most thorough integrations of the law, feminism, sociology and African American Studies; her approach is a roadmap for implementing more equitable educational and public policy. Let's hope those who institute such policies are savvy enough to pick up this book, read it, and go about the urgent business of reshaping America's future." - Denean Sharpley-Whiting, Distinguished Professor, Vanderbilt University, , USA, and author of Pimps Up, Ho's Down

"We are experiencing a unique moment. For the first time in America's history, African American women and girls live in the White House as the first family. It is clear, though, that their place is no watershed for the majority of the sisters, aunts, mothers, and grandmothers who live the everyday lives and circumstances of African Americans in the nation. Pratt-Clarke reminds us and demands from us a careful scrutiny of the meaning of racial-gender justice for black girls and women. Justice and equal access, as she reveals, is a right that has yet to be provided to most black girls in America. In fact, the barriers to these full freedoms are defined by attitudes and practices from both within and external to African American communities. Her work takes us a long way in the struggle to better understand how culture, educational policy, law, and practice work to maintain varied and entangled oppressions. It takes us still further in thinking through how to holistically create a world of greater equity for black girls and women." - Jennifer F. Hamer, Department of African American Studies, University of Illinois at Urbana-Champaign, USA; Editor of Black Women, Gender and Families

"It is now common knowledge that the educational system has failed black boys. Pratt-Clarke's important volume demarginalizes the plight of black girls, who are severely threatened as well. The future, if not the very existence, of a vibrant African-American community in the twenty-first century, will depend on strong well-educated citizens, where neither black men NOR black women have been left behind. This book, based upon a social justice approach, is a must-read for policymakers who need to be supportive and do the right thing for both genders." - Adrien K. Wing, Bessie Dutton Murray Professor of Law, University of Iowa, USA , Editor of The Law Unbound!: A Richard Delgado Reader; Critical Race Feminism: A Reader; and Global Critical Race Feminism: An International Reader

"Menah A.E. Pratt-Clarke says that one of her reasons for writing is her awareness that the stories of black girls' lives are still waiting to be told. With her insightful new book, Critical Race, Feminism, and Education: A Social Justice Model, Pratt-Clarke shows herself to be ameticulous scholar, a tireless advocate, and a passionate storyteller who has opened a great big window on a world that has been invisible to those who do not personally inhabit it for far too long." - Pearl Cleage, author of Mad at Miles: A Blackwoman's Guide to Truth and What Looks Like Crazy On An Ordinary Day
Buy options