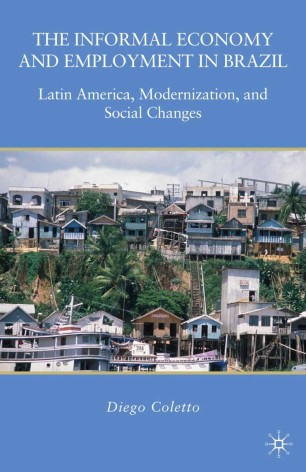 The Informal Economy and Employment in Brazil

This book presents some in-depth cases regarding specific informal economic activities in Brazil. Using an ethnographic approach, the author shows the social and economic processes that allow the informal economy to be reproduced, revealing the complex and heterogeneous relations between the formal and the informal parts of economy.

Diego Coletto is an assistant professor of Economic Sociology in the Department of Sociology and Social Research at Università degli Studi Milano-Bicocca (Milan, Italy). In recent years, he has pursued research projects investigating changes in employment relationships in the private and public sectors, with particular attention to the forms of flexible work. Since 2003, he has worked as national correspondent for the European Industrial Relations Observatory (EIRO) and the European Restructuring Monitor (ERM). Both EIRO and ERM are projects of the European Foundation for the Improvement of the Working and Living Conditions (Eurofound). For the two observatories, he wrote various articles and reports, which have been published on the Eurofound website.

"The idea of an informal economy has come a long way since its origins in a dialogue between ethnography and economic analysis four decades ago. This important new Brazilian study brings the debate concerning its relevance to development up-to-date, offering rich ethnography of its own and a penetrating synthesis of theoretical arguments." - Keith Hart, Emeritus Professor of Anthropology, Department of Anthropology, Goldsmiths, University of London, United Kingdom

"The Informal Economy and Employment in Brazil is a significant overview of 'ways of acting' in the Brazilian informality, focusing the attention on three 'typical' categories of informal workers (the garbage collectors, the street vendors, the door-to-door sellers, and the commercial agents). Through a careful use of ethnographic research tools, the book allows a better understanding of the 'new' informal economy, analyzing both the main differences compared to the principal forms of 'old' informality developed in the past, and important factors of approximation and differentiation in relation to the informal economy that characterizes the more advanced capitalist countries." - Ricardo Antunes, Professor of Labor's Sociology, University of Campinas (UNICAMP), Brazil

"Coletto revisits the concept of the informal economy through a rigorous method and keeps away the temptation to take refuge in the usual clichés in this field of study. This is an indispensable book for those who wish introduce themselves into this concept or review it. It is not just a study on the Brazilian economy, but, essentially, it is a work that focuses the construction of an epistemology that reaffirms the validity of the use of this concept to investigate deeper labor markets and social welfare in their multiple dimensions, political, social, and economic." - Maria Cristina Cacciamali, Professor of Economics, University of São Paulo (USP), Brazil

"Coletto's book retrieves the conceptual debate about informality and its changes since its emergence in the 1970s as an issue of a poor country, and nowadays as a product of flexible capitalism. Based on an extensive ethnographic study of "street" workers' categories - e.g. garbage collectors, street vendors, door-to-door saleswomen and commercial agents in Brazilian cities - the author showed the economic and social relations that maintain and reproduce workers in the informal economy, as well as the new proposals of organizational arrangements that aim to recover their dignity. An excellent contribution to understanding the Latin American modernity shades." - Jacob Carlos Lima, Professor of Sociology, Department of Sociology, Federal University of São Carlos (UFSCAR), Brazil

"The text of Diego Coletto casts light on the informal economy, which is a very important phenomenon in the so-called Third World's countries, but it is also increasingly relevant in the developed economies, more specifically after the 2008 great financial crisis, whose effects we are still living." - Gianfranco Bottazzi, Professor of Sociology, Department of Economic and Social Research, University of Cagliari, Italy