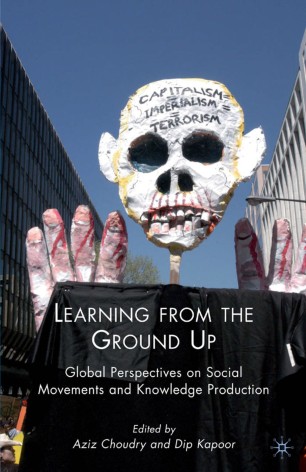 Learning from the Ground Up

The dynamics, politics, and richness of knowledge production in social movements and social activist contexts are often overlooked. This book contends that some of the most radical critiques and understandings about dominant ideologies and power structures, and visions of social change, have emerged from those spaces.

"An extremely important book. Neo-liberalism always had a dual nature: market fundamentalism and (far more insidious) institutionalism. Campaigning groups siphoned into a game of negotiations with transnational corporations, international institutions, and states are either neutralized or become agents in capitalism's structural manoeuvrings. Choudry and Kapoor's have sounded the battle-cry for a counter-attack against this manipulative agenda, and to re-affirm the role of agency. They have brought together some very interesting cases of precisely this kind of knowledge production by the movements themselves. They point the way forward to a new form of scholarship where scholars who are themselves committed activists engage critically with the mass movements, enabling the latter to understand better the historical trends which their agency is creating, and thus to gain confidence and sense of direction in the experimentation process from which major societal restructuring will emerge." - Robert Biel, Senior Lecturer in Political Ecology and Director of the Research Degree Program at University College London, UK, and author of The New Imperialism and The Entropy of Capitalism

"This is an exciting international contribution to developing knowledge production and learning from within - and for - social movement organizing. It demonstrates that our social movements are actively producing knowledge and providing crucial resources in our struggles for social justice and liberation." - Gary Kinsman, Professor of Sociology, Laurentian University, Canada; long-time queer liberation and anti-capitalist activist

"This volume makes an invaluable contribution toward connecting scholarly production with social movement activism. Going beyond simplistic calls to engage in 'scholar-activism,' which often positions academics lower in relationship to social justice activists, this book re-centers intellectual production within social movements themselves. Rather than simply theorize social movements, it positions social justice organizers as producers of the theory. It does not presume a romanticized notion of social movement organizing, rather, it brings a critical lens to the forces of co-optation and normalization within both the academy and activist arenas. A must-read for all those wishing to advance intellectually rigorous social movements." - Andrea Smith, Associate Professor of Media and Cultural Studies, University of California, Riverside, USA