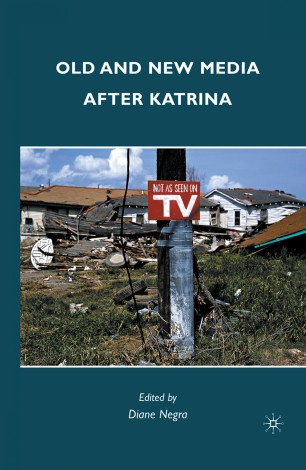 Old and New Media after Katrina

Ten years after Hurricane Katrina, this thoughtful collection of essays reflects on the relationship between the disaster and a range of media forms. The assessments here reveal how mainstream and independent media have responded (sometimes innovatively, sometimes conservatively) to the political and social ruptures "Katrina" has come to represent. The contributors explore how Hurricane Katrina is positioned at the intersection of numerous early twenty-first century crisis narratives centralizing uncertainties about race, class, region, government, and public safety. Looking closely at the organization of public memory of Katrina, this collection provides a timely and intellectually fruitful assessment of the complex ways in which media forms and national events are hopelessly entangled.

"Hurricane Katrina left an indelible footprint, not only on the city of New Orleans, the infrastructure of its culture, and the ecosystem of the Louisiana coast, but also on a vast spectrum of American cultural narratives and on the media that proliferate them. Magnificently assembled and superbly edited, the essays in Old and New Media after Katrina maintain the perfect intellectual pitch and stylistic tone - highly readable and relentlessly on target - to unpack with urgency and insight the neoliberal appropriation of human suffering and governmental malaise symptomatic of the nation's corroded social economy. Engaging sundry forms of mediation, from popular film and television, to reality shows and nature documentaries, to experimental art and National Public Radio, this enticing collection makes an important and very timely contribution to media studies and American studies. It's a terrific book." - Alan Nadel, author of Containment Culture and Television in Black-and-White America: Race and National Identity

"Hurricane Katrina was experienced by most Americans as a media event at the same time that the Internet and other digital technologies were rapidly converging with 'legacy' media. This thoughtful and impassioned collection breaks new ground by examining the digital representation of the event via user-generated video technologies such as YouTube alongside the traditional mass media. Katrina graphically exposed American racial inequalities and tensions across a range of media platforms, and it was a watershed moment for an American public that faced the reality of crumbling urban infrastructure alongside the development of new digital media infrastructures and economies. Read this book to understand media convergence and its role within and response to the first great national disaster of the digital age." - Lisa Nakamura, Director, Asian American Studies Program, University of Illinois, Urbana Champaign