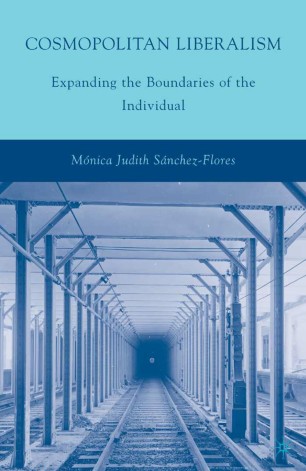 Expanding the Boundaries of the Individual

Cosmopolitanism in the contemporary debate is firmly based in the western tradition of liberal thought, which is culturally situated. The liberal conception of self alienates nature and childhood and its internal logic justifies colonialism and carries patriarchal and racialized baggage. Cosmopolitan Liberalism is a critique of the western tradition of liberal thought and an effort to overcome the philosophical boundaries of individualism towards a more inclusive and open conception. It seeks to expand the theoretical basis of individuality beyond its own limitations towards the ideal of universal love and the moral principle of compassion which are compatible with all world cosmologies - liberal and non-liberal. Cosmopolitan Liberalism is a reflection on what it is that all human beings owe one another in spite of the many humanly created borders that set us apart.

"This is an ambitious and, at times, inspiring book. Sánchez-Flores makes a powerful case for a compassionate cosmopolitanism that is genuinely, universally inclusive." - Kimberly Hutchings, Professor of International Relations, London School of Economics

"Mónica Judith Sánchez-Flores's new book, Cosmopolitan Liberalism, is an intellectually lively, wide ranging, and timely contribution to one of the most significant debates in recent political philosophy and social theory. The strength and originality of her approach is evident from the outset, is impressively sustained throughout, and succeeds where others have at best claimed plausibility for positions that rested ultimately on old and compromised arguments. Sánchez-Flores drags liberalism into the twenty-first century and makes no apology for ditching most of the background assumptions and historical context to which, hitherto it has clung.

This book opens new and much wider horizons for contemporary political theory. This is no longer an argument, however sophisticated, between Enlightenment and Romanticism. The driving force of her argument sweeps aside the parochial modernity and Eurocentrism of standard debates and places the issue at the centre of a genuinely global, world historical perspective that embraces the vast diversity of human societies over time and space. There is no possibility, as a result, of 'saving' liberalism through an appeal to the presumed residual universality of reason (however flimsy), or f human rights (however contested). The genuine universality to which, nonetheless, she appeals is rooted (for modern western societies) in, but is not exclusive to, an older Judaic-Christian tradition that insists on the primal reality of compassion and love. In this sense Sánchez-Flores is not afraid to promote a practical, as well as theoretical, hermeneutics of the heart.

The entire book is written with passion as well as commitment, clarity as well as subtlety, and with an acute eye to the practicalities of everyday life as well as the sweep of history. It will immediately gain a prominent place in current political and social philosophy of the most serious kind." - Harvie Ferguson,

Professor of Sociology, University of Glasgow