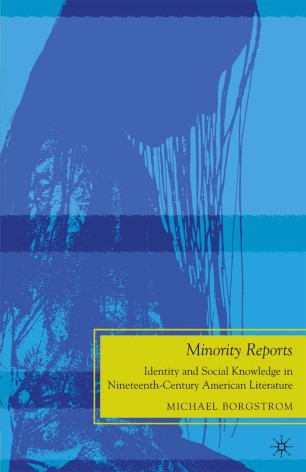 Part of the The Future of Minority Studies book series (FMS)

Through close readings of texts by African American and women authors, Minority Reports offers a theoretical defense of the use of identity categories in American studies by examining how early American literature not only responds to the social stratification of the nineteenth century but also challenges modern historical conceptions of this era.

"Borgstrom s Minority Reports is literary and social criticism of the highest order. Although his spirited readings ostensibly concern nineteenth-century American texts - Douglass, Harriet Beecher Stowe, and Harriet Wilson among others - the book asks us to commit ourselves to a nuanced understanding of identity and what it can teach us in the present moment. Borgstrom reads Uncle Tom s Cabin through the character Adolph, brilliantly questioning the non-normative gender concerns of the novel; by the same token, his analysis of Iola Leroy reminds us of how badly many of us have misread that complex text. Borgstrom, time and time again, in prose as graceful as it is lucid, explains what all of us know but fail to articulate: how our identities, if imaginatively and intellectually confronted, can teach us about the world and others. This book does just that, and we are all the better for it." - Kenneth A. McClane, W.E.B. Du Bois Professor of Literature, Cornell University

"In this cogent reconsideration of the ways constructed identities function in and beyond literary texts, Borgstrom has produced an essential work of scholarship. Minority Reports challenges the conventional wisdom on social identity and returns us to a world of nineteenth-century writing that still speaks volumes about where and who we are today. Along the way, he draws us into a realm of history that can be recovered and understood only through literature. An outstanding achievement." - John Ernest, Eberly Family Distinguished Professor of American Literature, West Virginia University, and author of Chaotic Justice: Rethinking African American Literary History (2009)