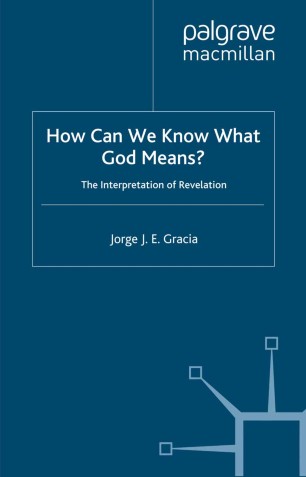 How Can We Know What God Means?

The Interpretation of Revelation

In spite of the growth of secularization, technology, and science, statistics tell us that religious conversions are on the rise, and the number of people who take religion and divine revelation seriously is at an all-time high. This phenomenon, curiously enough, has increased rather than decreased both inter and intra-religious conflicts: Protestants fight Catholics in Northern Ireland; Serbian Greek Orthodox fight with Kosovo Moslems in Yugoslavia; Jews fight with Moslems in Palestine; Hindus fight with Moslems in India - and the list is seemingly endless. There is bitter disagreement also in dealing with revelation, even within the same religious traditions and with regard to the same scriptures: Liberal Christians reject the literal interpretation of the Christian scriptures favored by Evangelicals; many Protestant groups do not accept the role of tradition in interpretation which Roman Catholics consider essential; Orthodox Jews strictly follow eating regulations presented in the Torah, but Reformed Jews take these in a different sense. The sources of these disagreements vary considerably. Some are rooted in historical events and traditions, but quite often they signal deep confusions concerning the interpretation of what believers take to be divinely revealed. In recent years, the author claims, the confusion has been compounded by the rise in the number and variety of interpretational approaches that are used to understand revelation. One can now take a culturalist, sociological, literary, psychoanalytical, historical, political, philosophical or feminist interpretations - to name just a few - approach. But do these all necessarily make sense when applied to religious texts? These and other questions cry out for answers which seldom are even attempted in the pertinent literature. This book offers a novel and sustained philosophical treatment of religious hermeneutics in which the author considers the main alternatives available in today's marketplace. The book is neither ideologically partisan nor thematically narrow and should be of interest to anyone concerned with interpreting the divine word. It offers a sensible roadmap to a topic that continues to draw heated debate in philosophy, theology, sociology, history and literary studies.

JORGE J.E. GRACIA is Distinguished Professor of Philosophy at the State University of New York at Buffalo. He has authored ten books including Individuality; Philosophy and Its History; A Theory of Textuality; Metaphysics and Its Task, and Hispanic/Latino Identity, and nearly 200 articles. He has also edited over a dozen books on metaphysics, historiography, hermeneutics, medieval philosophy, and Hispanic issues. He has been President of the Society for Medieval and Renaissance Philosophy, the American Catholic Philosophical Association, the Metaphysical Society of America, and the International Federation of Latin American and Caribbean Studies.