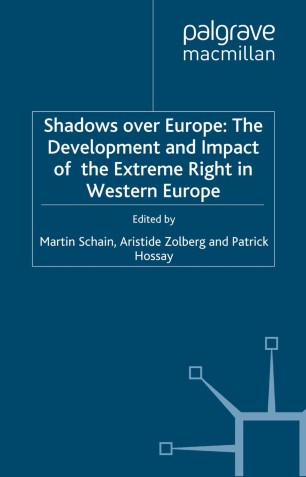 The Development and Impact of the Extreme Right in Western Europe

As the French Presidential elections clearly demonstrated in the Spring of 2002, the popularity of far right parties is gaining ever more strength. From the National Front in France to the British National Party, anti-immigration, anti-European Union platforms are winning more voters. The numbers alone are striking: the National Front in France received nearly eighteen percent of the nationwide vote in 2002 Presidential run-off between Chirac and Le Pen; the Swiss People's Party received 23 percent of the popular vote in a 1999 election; and Jorg Haider's Austrian Freedom Party moved from near collapse to second place in the 1999 election. The essays in Shadows Over Europe explore this growing presence of extreme right political parties in governments throughout Europe. These parties can no longer be dismissed as anomalous or temporary. It is clear that they have established an enduring presence in European politics. The contributors to this volume explore the origins of this trend, why they have gained such support, and where these parties might be headed. They explore the policy orientations of these parties and their role in electoral politics across the continent. Together, these essays provide a significant contribution toward understanding the rise and impact of the far right in Europe.