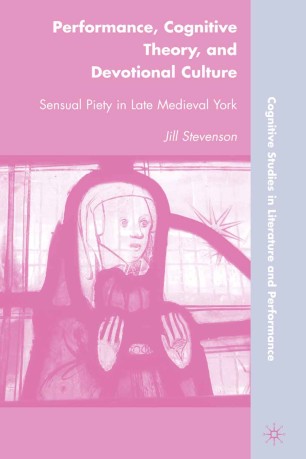 In Performance, Cognitive Theory, and Devotional Culture, Jill Stevenson uses cognitive theory to explore the layperson s physical encounter with live religious performances, and to argue that laypeople s interactions with other devotional media - such as books and art objects - may also have functioned like performance events. By revealing the remarkable resonance between cognitive science and medieval visual theories, Stevenson demonstrates how understanding medieval culture can enrich the study of performance generally. She concludes by applying her theories of medieval performance culture to contemporary religious forms, including creationist museums, Hell Houses, and megachurches.

"Stevenson's book is a complex and rich one, not easy to dip into, but worth a sustained reading, as the argument builds gradually from chapter to chapter, deftly adding detail and nuance as it proceeds . . . [This] contribution to the scholarly conversation adds to the current paradigm, rather than shifting it, but it is nevertheless an important addition, relevant to many areas of study; her book deserves to be read by anyone interested in drama, performance theory, devotional practices, or late medieval material culture." - Journal of English and Germanic Philology

"This very poised first book represents an important new departure in the study of early drama. Judiciously drawing on theoretical models drawn from cognitive science, it is the first comprehensive study of the nature of spectatorship, the 'performance literacy' of the medieval audience. The book explores, using comparators including the liturgy of the Mass, and the rites surrounding death, how the materiality of York's mystery plays in performance functioned as a devotional process, creating affective resonances that led the audience to experience vividly embodied meaning." - Pamela M. King, University of Bristol and author of The York Mystery Cycle and the Worship of the City

"Stevenson brings together different disciplines, subjects, and methods to understand a period and performance tradition in exciting new ways. She beautifully demonstrates the potential of cognitive science to re-read history and performance, using conceptual blending theory to imagine the York cycle as providing the medieval layperson a blended space to 'live in,' a place where Christ's past is performed - and thus reconstituted - now. The medieval period gains incredible relevance in her hands." - Amy Cook, Assistant Professor, Indiana University and author of Shakespearean Neuroplay: Reinvigorating the Study of Dramatic Texts and Performance Through Cognitive Science