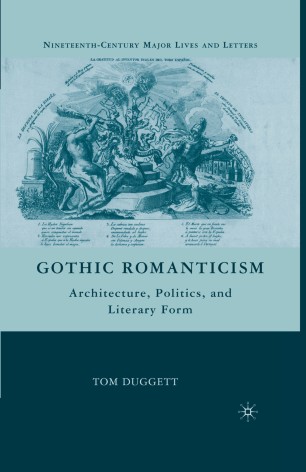 Gothic Romanticism, winner of the 2010 MLA Prize for Independent Scholars, is a study of the relationship between British Romanticism and the Gothic Revival. Reading a wide range of canonical and raretexts, and spanning the Romantic discourses of architecture, politics, and literary form, the book recovers the collaborative project of Wordsworth, Coleridge, and Southeyfor a purified 'Gothic' poetry and a 'second Gothic' culture.

TOm DUGGETT is Lecturer in English Literature at Xi'an Jiaotong Liverpool University. He has previously taught at the University of St Andrews, and the University of Bristol, UK, and has published articles in Romanticism, The Wordsworth Circle, and various other journals.

"Tom Duggett's Gothic Romanticism is a compellingly ambitious study of the pursuit of a purer and better gothic in late-eighteenth and early-nineteenth-century England. Focusing on Wordsworth and the Lake Poets' attempt to refine a coarser, more sensational gothic as set forth in the novels of Radcliffe and Scott and in antiquarian curiosities, Duggett weaves sustained analysis of their poetry with thoughtful commentary on medieval architectural imagery and history, the turn to conservative

politics, and educational reform. This multileveled investigation demonstrates in engaging prose the centrality of a cultivated rhetoric of a gothic aesthetic in this period while provocatively suggesting its relevance to a post-9/11 era where architecture 'has assumed an importance that seemed without precedent.' Gothic Romanticism goes far in detailing such a poetic, cultural, and historical precedent." - MLA

"Tom Duggett's excellent Gothic Romanticism takes its cue from Wordsworth's Preface to The Excursion of 1814, in which he likened his poetic works to "gothic Church" ... With a fine eye for the cultural tributaries and confluences that inform this invisible edifice, Duggett's densely-woven but fluent prose illuminates the way in which poetic and political imagination fused in Wordsworth's aspirational emblem . . .[T]he book succeeds . . . not only as a study in cultural history, but as an education in the dynamic fusion of the poetic and the constitutional imagination - something so fundamental to the common law cultures of the world, and yet rarely valued as such. To articulate the many planes of Wordsworth's intricate activity in this sphere is a fine achievement." - The Wordsworth Circle

"[Gothic Romanticism] is a thoroughly researched, historically-driven study that takes disparate topics (architecture, politics, literature, and education, among others) and draws them together in a lucid style. Such an offering is a genuine contribution to the study of Wordsworth's career as well as to the intertwined cultural landscape of Britain in the late eighteenth and early nineteenth centuries." - Romanticism

"Duggett's focus is not on Gothic fiction in the Romantic period, but on the wider and more challenging field of cultural Gothicism - profoundly and actively social and political, and integral to the advent of Romanticism. In fluent prose and with telling rigour, Duggett develops new ways of understanding Gothicism through an approach that is refreshingly historicist and culturally ambitious, and which encompasses the literary uses of architecture, national and international politics, and educational theory. What arises from this strikingly original analysis is a significant recasting of William Wordsworth as the chief architect of emergent Gothic culture, as well as sophisticated new models of both Gothicism and Romanticism that promise to inspire further important work." - Nick Groom, Professor of English, University of Exeter, Cornwall Campus

"Duggett achieves a subtle tracing of the complex and ambivalent trope of the Gothic as it appears, often in occluded form, in a number of Wordsworth's works. His handling of the political writing is exceptionally illuminating." - Tim Fulford, Professor of English,Nottingham Trent University