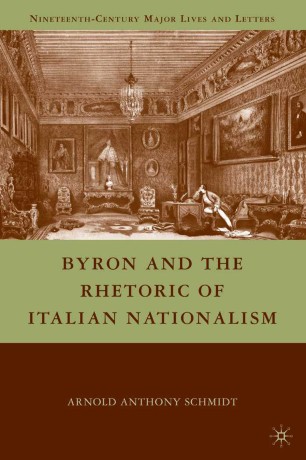 Byron and the Rhetoric of Italian Nationalism

Making extensive use of untranslated texts, Arnold Schmidt discusses the impact of Byron's life and works on the discourse of Italian nationalism between 1818 and 1948, his participation in Grand Tour and salon culture, and his influence on Italian Classicists and Romantics.

"Most books on Byron's life in Italy, or on the writing he did there, or what we may call his Italian afterfame are inevitably incomplete. This study covers a huge range of subjects and is informative and groundbreaking on just about everything it takes up. I feel I learned from every page. - John Clubbe, President of the International Byron Society in presenting the Elma Dangerfield award

"Arnold Anthony Schmidt's study shows anglophone readers the crucial if not paradoxical role played by the Byron myth in the Risorgimento. In Greece, nationalism grew from the Christian identity of the peoples ruled by Turks. In Italy, however, religion fragmented oppositional politics, and Byronic Romanticism highlighted the differences between secularist and Catholic liberalism. Byron was denounced as 'a curse to the whole of Europe' by the Catholic theologian Vincenzo Gioberti, who strenuously opposed the poet's canonization by the Risorgimento . . . there is much to be grateful for in this original and scholarly study." - The Times Literary Supplement

"Arnold Anthony Schmidt's Byron and the Rhetoric of Italian Nationalism goes a long way toward elucidating the many aspects of Byron's immersion in Italian life. As much social and cultural history as literary criticism, it manifests an impressive range of reading and allusions . . . Historical and contextual scholarship at its best.' Wordsworth Circle

"Presenting historical and literary material in a concise, readable style...the combination of careful research and perceptive criticism makes this book a valuable addition to Byron studies and to our understanding of the promise and the problems of Italian nationalism." - Italian Quarterly

"Covers an impressively wide range of important materials and authors and brings into sharp focus the complex ideological underpinnings which beset the discourses of the recipients of Byron's myth." - Nineteenth-Century Contexts

"Schmidt's book shows with impressive detail and thorough argument that the mythical image of Byron was as important to the development of the Italian nationalist ideal as it had been to the Greek. From Pellico via Cavour and Garibaldi to (whisper it) Mussolini himself, Byron's preparedness to sacrifice himself for Italian freedom and nationhood was an example to them all. A tour-de-force of documentation and analysis." Peter Cochran, Cambridge

"Schmidt's Byron and the Rhetoric of Italian Nationalism is a fascinating and expertly-researched addition to our understanding of Byron not just as a British Romantic poet but as an international cultural phenomenon. Positioning Byron in the context of European liberal nationalism, Schmidt demonstrates how although in Britain Byron's scandalous lifestyle and provocative writings tended to overshadow his liberal leanings, in Italy he became an inspiration to the emergent nationalist movement The book will be of value not just to Byron scholars but to anyone interested in the cultural impact of Romanticism." Clare A. Simmons, Department of English, The Ohio State University