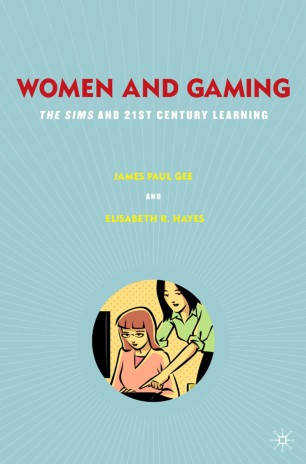 The Sims and 21st Century Learning

The authors argue that women gamers, too often ignored as gamers, are in many respects leading the way in this trend towards design, cultural production, new learning communities, and the combination of technical proficiency with emotional and social intelligence.

James Paul Gee is the Mary Lou Fulton Presidential Professor of Literacy Studies at the Arizona State University. He is the author of What Video Games Have to Teach Us About Learning and Literacy and Good Games and Good Learning. Elisabeth Hayes is a professor in the Division of Learning, Technology and Psychology in Education at ASU’s Graduate School of Education.

"James Paul Gee and Elisabeth R. Hayes offer us vivid portrait of women of all ages gaming beyond gaming, transforming the successful The Sims video games into a platform for their own social, creative, and intellectual lives. These women are gamers, but they are also tinkerers, community leaders, authors, programmers, and artists, and their engagement with The Sims has opened up new opportunities for them to learn and grow far beyond the classroom. Gee and Hayes are patient, informed, and insightful guides showing us how these kinds of participatory cultures might transform our understanding of education in the 21st century." - Henry Jenkins, Confronting the Challenges of a Participatory Culture: Media Education for the 21st Century

"Women and Gaming is must-read for anyone interested in the social or intellectual side of gaming - scholars, designers, players and parents alike.At long last, we have a serious treatment of the forms of social engineering or "soft modding" that women do as part of gameplay - not merely as some counterpoint to the (predominantly-male) practice of technical modding (modifying) found in gaming communities but in fact as a vital practice in its own right and a key feature of what it means to Design. Gee & Hayes have managed to treat an often-ignored topic with both depth and clarity." - Constance Steinkuehler, University of Wisconsin-Madison