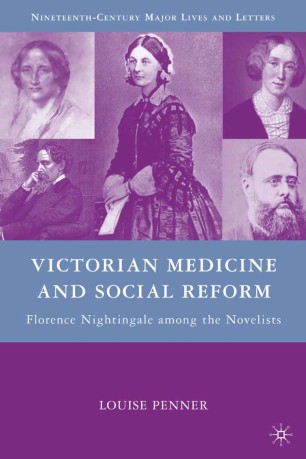 Florence Nightingale among the Novelists

Victorian Medicine and Social Reform traces Florence Nightingale s career as a reformer and Crimean war heroine. Her fame as a social activist and her writings including Notes on Nursing and Notes on Matters Affecting the Health, Efficiency and Hospital Administration of the British Army influenced novelists such as Wilkie Collins, Elizabeth Gaskell, and George Eliot. Their novels of social realism, in turn, influenced Nightingale's later essays on poverty and Indian famine. This study draws original conclusions on the relationship between Nightingale s work and its historical context, gender politics, and such twenty-first-century analogues as celebrity activists Angelina Jolie, Al Gore, and Nicole Kidman.

LOUISE PENNER, Assistant Professor of English at the University of Massachusetts, Boston, USA.

"Victorian Medicine and Social Reform: Florence Nightingale Among the Novelistsmakes an important contribution to the study of this famous figure, not only by outlining the literary influences on Nightingale's life and letters, but by emphasizing the shifts in her rhetorical techniques according to her underlying goals for social health and reform." - Social History of Medicine"Victorian Medicine and Social Reform: Florence Nightingale among the Novelists is an original addition to the Nightingale scholarship which sees beyond stereotypical representations of the famous Crimean War heroine. Through looking closely at Nightingale s writings, Penner offers a portrait of the reformist and makes explicit how she addressed health and social problems by recurrently adapting her rhetoric to her reading public." - Miranda

"Penner s new book makes an intriguingly backward historicist move: instead of placing Victorian literature in a social-historical context, Penner shows how Florence Nightingale s mission of social and medical reform reflected what Nightingale had learned from novels. Whether quarrelling with Dickens and Eliot or borrowing rhetorical moves from Gaskell, Nightingale s work talks back to fiction. Seeing Nightingale as a reader of and responder to literature adds a new dimension to our understanding of the history of Victorian medicine and social reform, both in England and the colonies." - Robyn Warhol-Down, Arts and Humanities Distinguished Professor of English, The Ohio State University

"An exemplary set of readings of key Victorian texts by George Eliot, Elizabeth Gaskell, and others, showing how microhistoricist knowledge of local and sometimes arcane debates about psychology and medicine can illuminate what these writers are up to. Penner places her central figure, Florence Nightingale, in the midst of these debates as a policy intellectual, based on hitherto unexamined archival materials, and enables us to see ideological fissures many earlier critics have missed. These fissures, in turn, are shown to structure texts such as Brontë s Villette and Eliot s Middlemarch, in surprising ways." - Lawrence Rothfield, University of Chicago, author of Vital Signs: Medical Realism in Nineteenth-Century Fiction

"Penner gives us a Florence Nightingale we are glad to discover: a savvy social reformer unafraid to use the rhetorical strategies of popular fiction to promote improved health care." - Susan Squier, author of Liminal Lives: Imagining the Human at the Frontiers of Biomedicine