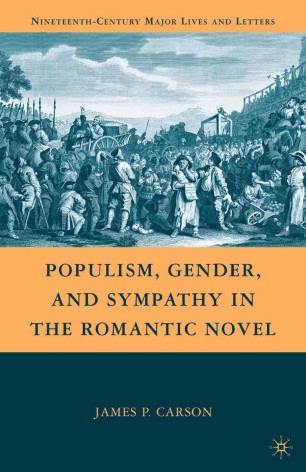 Populism, Gender, and Sympathy in the Romantic Novel

Populism, Gender, and Sympathy in the Romantic Novel is a richly historicized account that explores anxieties about crowds, fiction and disguise, women authors, and unstable gender roles. James P. Carson argues that the Romantic novel is a form individualizing in its address, which exploits popular materials and stretches formal boundaries in an attempt to come to terms with the masses. Informed by Bakhtin, Foucault, and Freud, this book offers fresh new readings of works by Sir Walter Scott, William Godwin, Matthew Lewis, Charles Robert Maturin, and Mary Shelley.

"Carson s Populism, Gender, and Sympathy in the Romantic Novel is an intensely original study, a powerful and provocative meditation on political and gender issues raised with special urgency by the major Romantic English novelists. By extracting from these novels a rich thematic complexity centered on mass movements and the role that women are represented as playing in them, Carson rescues Gothic and Romantic fiction from the charge that it is merely sensationalistic or sentimental. This is an important book, consistently insightful and often revelatory." - John Richetti, A.M. Rosenthal Professor of English (Emeritus), University of Pennsylvania

"In this fascinating study, Carson examines the decline of the voice of the crowd in the Romantic era, as social unity achieved in the realm of sound is challenged by aural surveillance. He vividly recounts the process by which Romantic novels are complicit in and resistant to the attempt to exert power over the masses by individualizing them. This work importantly engages with recent work on nations and nation-building and on the place of people in them." - Frances Ferguson, Mary Elizabeth Garrett Professor, Johns Hopkins University