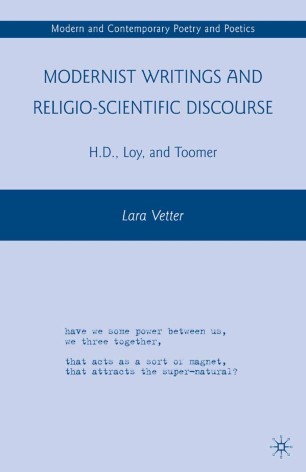 Addresses the early twentieth-century intersection of scientific and religious discourse exploring literary modernism through the lens of cultural history, focusing on the works of H.D., Mina Loy, and Jean Toomer. It covers a range of topics such as electromagnetism and sexuality, dance, and theories of spiritual evolution.

LARA VETTER is Assistant Professor of English at the University of North Carolina at Charlotte, USA.

"Vetter s Modernist Writings and Religio-scientific Discourse offers a fascinating overview of convergences between late nineteenth- and early twentieth-century metaphysical, scientific, and literary speculations about the sexual body, the body in motion, and the racialized body. Moving easily between meditations by sexologists, physical trainers, dance theorists, and eugenicists, on the one hand, and preachers, Mesmerists, Theosophists, and Christian Scientists on the other, Vetter demonstrates the wash of extra-literary ideas through literary documents, published and unpublished, by H.D., Mina Loy, and Jean Toomer. The result is a rich and dynamic picture of the flux and struggle of ideas that constitute a cultural moment." - Adalaide Morris, John C. Gerber Professor of English, The University of Iowa

"Having read widely in both relevant published and archival work as well as extra-literary texts - including popular periodicals and heterodox religious tracts - Vetter has succeeded in developing a nuanced, sophisticated, and interdisciplinary approach to her material. This monograph will appeal to a number of different constituencies within modernist literary studies, including scholars who are interested in material and cultural history, theories of gender and sexuality, and the unpublished works of three important modernist writers: H.D., Loy, and Toomer. Vetter´s book is, indeed, admirably conceived and potentially groundbreaking." - Demetres P. Tryphonopoulos, University Research Professor, University of New Brunswick and editor of H.D. s Majic Ring

"Vetter explores two largely neglected aspects of modernist writing - its spiritual and scientific dimensions - and offers a nuanced portrayal of the literary progeny spawned by these strange bedfellows. Through perceptive close readings of works by H.D., Loy, Toomer, and other key figures, she shows how religio-scientific discourse empowered modernist writers to articulate profoundly materialist concerns about race, sexuality, and the paradoxes of embodiment." - Helen Sword, The University of Auckland