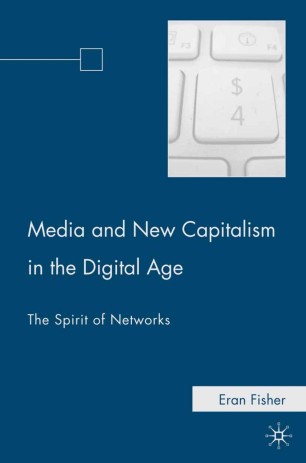 Media and New Capitalism in the Digital Age

The Spirit of Networks

This book explores the new terrain of network capitalism through the transformations of the discourse on technology. Rather than viewing such discourse as either a true or false reflection of reality, Fisher evaluates the ideological role that technology discourse plays in the legitimation of a new form of capitalism. Based on an extensive empirical analysis, the book argues that contemporary technology discourse at one and the same time promises more personal empowerment through network technology and legitimates a more privatized, flexible, and precarious economic constellations. Such discourse signals a new tradeoff in the political culture of capitalism, from a legitimation discourse which emphasizes the capacity of technology and technique to bring about social emancipation (through equality, stability, and security) to a legitimation discourse which focuses on the capacity of technology to bring about individual emancipation (through individual empowerment, authenticity, creativity, and cooperation). Contrary to the prevailing assumption that sees network technology as liberating from the rigidity and pitfalls of a stifling, Fordist capitalism, the book offers a theoretical framework which sees contemporary technology discourse as an ideology that legitimates the economic, social, and political arrangements of the new capitalism.

Eran Fisher is an Assistant Professor at the Open University of Israel. He is also the co-editor (with Tova Benski) of Internet and Emotions (2013).

"Fisher's brilliant book provides cogent reasons why we should be skeptical about laptop capitalism and its fluidity and instantaneity of communication. As we surf, text, and post, we are actually becoming more enmeshed in the cyber-networks of command and control that, now as before, bear down heavily. Fisher helps us understand the age of digitality as, above all, capitalist." - Ben Agger, Professor of Sociology and Humanities, University of Texas at Arlington

"This carefully researched and skillfully written guide to the networked world doesn't just demolish the dreamy visions of Utopia 2.0. It provides precisely the comprehensive analysis we need to understand their power and persistence." - Vincent Mosco, Canada Research Chair in Communication and Society, Queen's University, Canada

"This is an audacious systematic ideology-critique of digital capitalism. By meticulously exposing the underlying assumptions and consequences of the digital technology discourse, the book evinces how a seemingly neutral network that creates 'friction free capitalism' germinates a neo-capitalist 'iron cage.' The book reconnects the semiotic and material societal levels. It should be placed on your shelf with Castells' book on informational capitalism, with Dyer-Witheford's on cyber-Marxism or with Mosco's on the digital sublime." - Uri Ram, Professor of Sociology and Anthropology, Ben Gurion University
Buy options