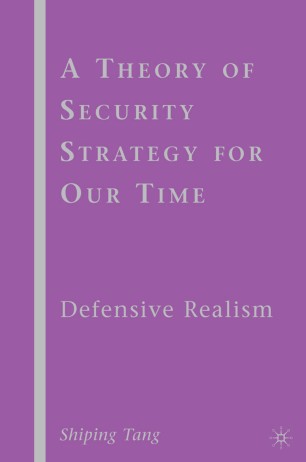 A Theory of Security Strategy for Our Time

"In an extraordinarily thorough and penetrating analysis of fundamental issues surrounding defensive realism and the security dilemma, Shiping Tang takes us deep into the theoretical and empirical controversies of the nature of international conflict. In doing so, he sheds a great deal of light on many questions of realism, signaling, trust, and cooperation." - Robert Jervis, Adlai E Stevenson Professor of International Politics, Columbia University

"A thoughtful and creative attempt to buttress the theoretical underpinnings of defensive realism and lay the basis for an evolutionary theory of international relations. Practitioners and students alike will find this a profitable read." - Richard Ned Lebow, James O. Freedman Presidential Professor of Government and Centennial Professor of International Relations, Department of Government, London School of Economics and Political Science

"Shiping Tang is after big game - nothing less than a coherent theory of defensive realism. Wielding a sharp machete, he fearlessly wades into the overgrown jungle of realisms and opens useful pathways for those seeking to understand and formulate grand theory. Essential reading for all scholars of world politics." - Jeffrey W. Legro, Compton Professor of World Politics, Department of Politics, University of Virginia