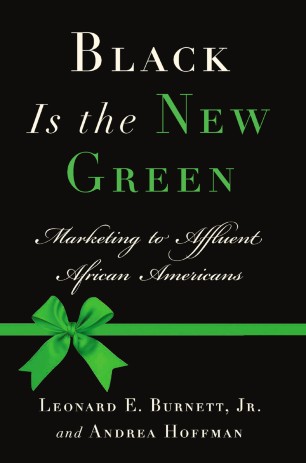 Black Is the New Green

The general market for luxury goods has become stagnant. Given the new economic reality of the early 21st Century - not to mention the all-important new demographics of the new century - it s bad business to continue to rely on luxury s traditional customer base to support sales, or on tired marketing strategies and tactics. InBlack is the New Greenauthors Burnett and Hoffman show readers how to follow in the footsteps laid down by brands such as Gucci, HSBC, Sony Electronics, and Aston Martin, amongst others, to become successful in a segmentcorporations can t afford to overlook if growth isthe objective. The total number of affluent ethnic households in the United States in now estimated at over 1.3 million, the buying power of affluent African Americans (referred to as AAA s in this book) is currently $87.3 billion. It would be foolish in the extreme not to tap into this rich buying segment, yet that is exactly what the marketing arms of companies do all too frequently. Sometimes this is because the executives in a particular marketing department are unaware of the potential that exists within this segment, sometimes it s because they are baffled about how to reach out to this segment and sometimes it s because they think they lack the money or resources to make a credible effort at adding a whole new segment. And sometimes, unfortunately, it s because they have reached out in the past but their efforts were unappealing to the AAA audience. Black is the New Green will show you how to attract this lucrative market and create brand loyalty and product bonding among affluent African Americans in an affordable and measurable way. Up until now, the affluent African American market has been underappreciated and overlooked. But with a sitting African American president - the time is now to tap into this market and to embrace a constituency that will have a lasting effect on your bottom line. http://www.blackisthenewgreenthebook.com