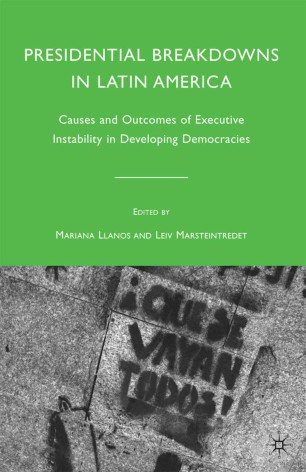 Causes and Outcomes of Executive Instability in Developing Democracies

This volume is the first comprehensive analysis of a new type of executive instability without regime instability in Latin America referred to as "presidential breakdown." It includes a theoretical introduction framing the debate within the institutional literature on democracy and democratization, and the implications of this new type of executive instability for presidential democracies. Two comparative chapters analyze the causes, procedures, and outcomes of presidential breakdowns in a regional perspective, and country studies provide in-depth analyses of all countries in Latin America that have experienced one or several presidential breakdowns: Argentina, Bolivia, Brazil, Dominican Republic, Ecuador, Guatemala, Paraguay, Peru, and Venezuela. The book also includes an epilogue on the 2009 presidential crisis in Honduras.


MARIANA LLANOS is a researcher at the German Institute for Global and Area Studies, Institute for Latin American Studies in Germany.

LEIV MARSTEINTREDET is a Ph.D. Research Fellow in the Department of Comparative Politics at the University of Bergen, Norway.

"A worrisome proportion of democratically elected presidents in Latin America fail to complete their terms in office. This collection represents a major advance in our understanding of contemporary democracy in the region. Contrary to journalistic interpretations, the authors demonstrate that presidential breakdown is driven more by executive-legislative relations than by popular protests - and also that recent presidential breakdowns are more likely to lead to the reequilibration of a democratic regime than to its demise. In combining creative theory-building with detailed coverage of recent political history, this volume is a major contribution to comparative presidentialism and to the study of Latin American democracy." - Timothy J. Power, University of Oxford

"The choice of the term presidential breakdown to conceptually describe the many early presidential exits in Latin America is right on target, as it accurately describes one of the most interesting phenomena in Latin American presidentialism, brilliantly treated by the authors. The detailed knowledge of these breakdown processes, presented from a comparative perspective, is one of the great attributes of this must-read book." - Manuel Alcántara, Universidad de Salamanca