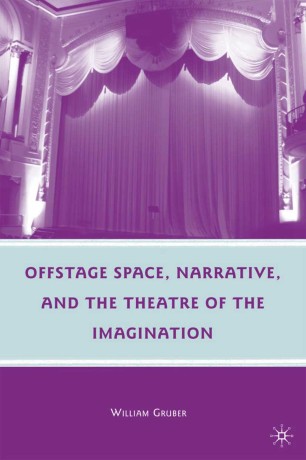 Offstage Space, Narrative, and the Theatre of the Imagination

Offstage Space, Narrative, and the Theatre of the Imagination is a study of extrascenic space and how playwrights have used narrative as an alternative to conventional scenic enactment. The book covers the work of writers as diverse as Euripides, Plautus, Shakespeare, Susan Glaspell, Gertrude Stein, Bertolt Brecht, Samuel Beckett, Marguerite Duras, Brian Friel, and Thomas Bernhard. William Gruber offers a wide-ranging overview of the dramaturgical choices dramatists make when they substitute imagined events for perceptual ones.

WILLIAM GRUBER is Professor of English and Theatre Studies at Emory University, USA.

"In an age of relentless visibility, Gruber celebrates the subtle pleasures of the unseen, the productive force of antitheatricality at the heart of theater." - Martin Puchner, H. Gordon Garbedian Chair in English and Comparative Literature and Co-Chair, Theatre Ph.D. Program, Columbia University

"Probing the history of drama (plays and critical writings) through the ways in which plays narratively endow unseen space and characters with realness of presence, Gruber s Offstage Space, Narrative, and the Theatre of the Imagination will appeal not only to students and scholars of drama and performance but also to readers interested in narrative effect from a literary point of view. Gruber s comprehensive overview of mimesis through diegesis fleshes out the dramaturgically productive formal tension that has always existed between narration and enactment." - Les Essif, author of Empty Figure on an Empty Stage and The French Play

"This book offers a critically astute and clearly written study of the interplay between enacted and narrative elements in the theater. Gruber demonstrates his mastery of the material, from the ancient Greeks to post-modern performance, offering valuable insights on the play between what we see onstage and what we are asked to imagine about the world beyond it. An impressive and valuable contribution to our understanding of how narrative works with, and often against, mimesis, Gruber s volume will interest anyone drawn to think about what the theater offers, how it functions, and why it matters." - Rush Rehm, Professor of Drama and Classics, Stanford University and Artistic Director, Stanford Summer Theater