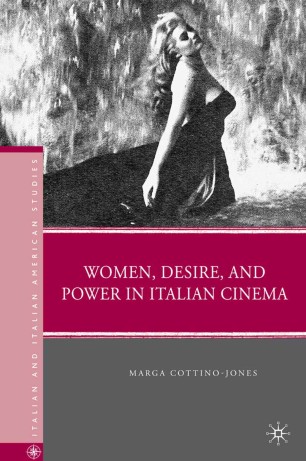 Women, Desire, and Power in Italian Cinema offers, for the first time in Italian Cinema criticism, a contextual study of the representation of women in twentieth-century Italian films. Marga Cottino-Jones argues that the ways women are depicted on screen reflects a subconscious "sexual conservatism" typical of an Italian society rooted within a patriarchal ideology. The book then follows the slow but constant process of social awareness in the Italian society through women in film, especially after the 1950s. Comprehensive in scope, this book analyzes the films of internationally known male and female directors, such as Antonioni, Fellini, Rossellini, Visconti, Bertolucci, Benigni, Cavani, Wertmuller, Comencini, and Archibugi. Special consideration is given to the actresses and actors that have become the icons of Italian femininity and masculinity, such as Sofia Loren, Gina Lollobrigida, Silvana Mangano, Gian Carlo Giannini, Marcello Mastroianni, and Alberto Sordi.