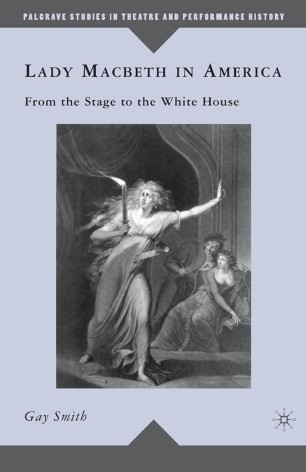 From the Stage to the White House

Lady Macbeth has haunted American history since the conflicts of Shakespeare s England spilled over into New England s real witch hunts. To reveal how Lady Macbeth entered American politics as an icon for the First Lady, this investigation focuses on the prominent actresses in the role, how they performed, and their effect on audiences anxious about the country s First Lady and her influence over the President - especially at times of war. Smith ably shows how the various Lady Macbeths have both reflected and shaped the image their contemporaries have of the ambitious political wife, producing parallels that converge dramatically in twentieth-century "witch hunts."

GAY SMITH is Professor Emeritus in the Department of Theater at Wesleyan University, USA.

"A highly readable performance history of Lady Macbeth...[full of]a rich and compelling set of historical anecdotes that are rewarding in their own right." - Women's Studies "Leaves the reader satisfied after reading. The object of research is fascinating and not only comprehensible; it rather makes the readers ask themselves why a study into the field (at least on this scale) has not been undertaken before . . .Smith s analyses are ample proof of her excellent, detailed, and fascinating research in the field. The book is a worthy contribution to the discussion of whether Shakespearean studies and up-to-date Cultural Studies can link and shows that Shakespearean allusions are as strong in English-language (and other) cultural contexts as ever." - www.theaterforschung.de

"Tracing the path of an iconic Shakespearean character through American theatrical and political history, Smith discovers Lady Macbeth s ghostly double in the terrifying politicianess. Ruthless and predatory, such a fiend-like Queen supposedly schemes behind the scenes to promote her husband's political ambitions, no matter how evil. When that career involves being President of the United States, as it does in a number of vivid case studies in this readable and quotable book, from Abigail and John Adams to Hillary and Bill Clinton, opposition propaganda and Shakespearean drama join forces to haunt the popular imagination with the ultimate specter of illegitimate government - the sexually manipulative yet paradoxically unsexed First Lady. Smith combines meticulous production history and cultural interpretation to remind us that the politicization of Shakespeare is not for an age but for all time." - Joseph Roach, Sterling Professor of Theater and English, Yale University

"Smith has not only shaken every vestige of dust off our idea of Lady M, but by honoring her most rigorous mediums, goes on to make a compulsively readable case for her political immediacy in American discourse." - Susan V. Booth, Artistic Director, The Alliance Theatre

"Smith s Lady Macbeth in America is a terrific read. Most of us have heard this or that First Lady (Mary Lincoln, Nancy Reagan, Hillary Clinton) referred to as a Lady M type, but this book puts the label in its proper - and very entertaining - political and theatrical context. Smith provides a sharp, in-depth and colorful history of those White House occupants who have been depicted as Shakespeare s most noir-ish couple, as well as highlighting the various ways the play itself has been viewed in relation to shifting political - and sexual - attitudes. For those of us who put our politics center stage, Lady Macbeth in America is a must." - Jeffrey Hatcher, playwright and screenwriter