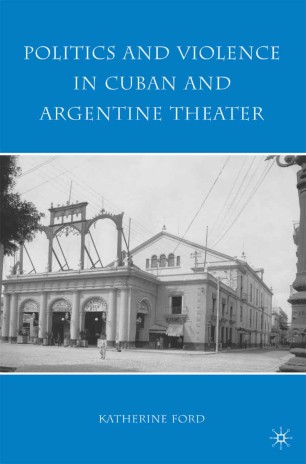 This book looks at Cuban and Argentine theater of the late 1960s and early 1970s to see how the idea of spectacle as violence was used to comment on and question the social and political violence that was unfolding offstage.

"Ford sets up appropriate chronological and geographical goals as she deals with the complex topic of violence and its theatrical representations.The fact that the author chooses two countries - Cuba and Argentina - considered culturally different within Spanish America with extremely distinguished theatrical histories and also very turbulent political ones in the twentieth century, allows her to uncover the diverse manifestations of psychological, physical, and political violence in a period of six years of theatrical production: 1968-1974. Theseyears are profoundly significant in the two countries political development since they represent periods when repression was particularly blatant.Thisbook will be an asset to specialists in the field of Spanish American theater, and to students and scholars interested in examining the issue of violence in Spanish American literature." - Priscilla Meléndez, University of Connecticut