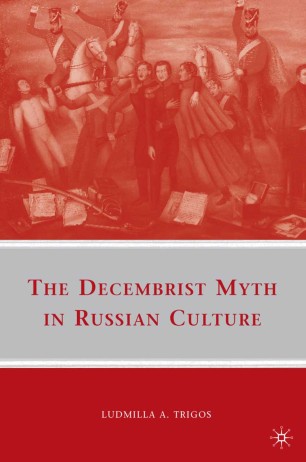 The Decembrist Myth in Russian Culture

This book is the first interdisciplinary treatment of the cultural significance of the Decembrists' mythic image in Russian literature, history, film and opera in a survey of its deployment as cultural trope since the original 1825 rebellion and through the present day.


LUDMILLA A. TRIGOS is an Independent Scholar who has taught at Columbia University, Barnard College, Drew University and New York University, USA, and is co-editor of Under the Sky of My Africa: Alexander Pushkin and Blackness.

In this solidly researched and lucildy written book, Trigos makes a valiant effort to map this myth, from its beginnings to the present. Summing up: Recommended." - Choice

"Trigos exciting book traces the ever-changing, sometimes surprising, shapes of the Decembrist myth in nineteenth, twentieth, and twenty-first-century Russian culture. At points in history upon which Trigos focuses in this truly interdisciplinary study, she explores the complex intersections of the historical, political, and high and low cultural responses to the Decembrists. A fascinating book!" - Ellen Chances, Professor of Russian Literature, Princeton University

"On December 14, 1825, a small group of disaffected officers and noblemen attempted to overthrow the Russian autocracy. Their revolt failed miserably, and its lack of clear planning and purpose, combined with the fact that the new Tsar, Nicholas I, tried both to suppress the story and to use it for his own political ends helped make it into a rich source of myth and legend. The Decembrist Myth in Russian Culture explores this process as it unfolded over almost two centuries, moving deftly among works of historians, memoirists, revolutionaries, authors of fiction and poets, as well as composers and filmmakers. Trigos account offers a unique and engrossing survey of modern Russian culture from Pushkin to Putin, from the classics to the Bolsheviks, from dissidents to postmodernists. Her account dramatically brings home the fact that in Russia to this day history is still very much up for grabs." - Marcus C. Levitt, Associate Professor of Slavic Languages and Literatures, University of Southern California

"The Decembrist uprising was uneventful and led to no perceptible change. The same cannot be said about the myths it bred. This lucid, informative and captivating account of Decembrist mythology from Pushkin to Putin takes you to its ideological, political, ritualistic-celebratory, literary, film, operatic and media representations, vividly demonstrating that the past is "usable" in infinitely many ways, until - perhaps - it wears out." - Irene Masing-Delic, Professor of Slavic and East European Languages and Literatures, Ohio State University