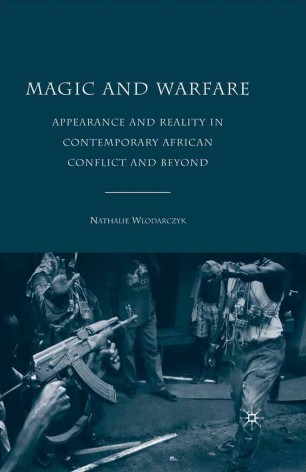 Appearance and Reality in Contemporary African Conflict and Beyond

This study explores the roles played by magic in contemporary African warfare, specifically through the case of Sierra Leone, to assess its impact on behaviour in conflict. A conceptual framework is suggested for analysing culturally alien practices more broadly and to inform approaches to civilian and military intervention.

NATHALIE WLODARCZYK is Deputy Director of Global Forecasting at Exclusive Analysis, where she is responsible for all analysis views and forecasts on war, terrorism and civil unrest. She holds a PhD in War Studies from King's College London, UK.

"Fascinating. Sierra Leone s war has been extensively documented by journalists, historians, political scientists, and anthropologists. Quite apart from its theoretical intervention into strategic military studies, Magic and Warfare is a valuable record of one of the least understood parts of this war. Wlodarczyk s careful reading of the existing literature, coupled with her own ethnographic work among the war s participants, lend credibility to her claim that understanding social and historical contexts goes a long way toward rendering intelligible the seemingly inexplicable practices of many belligerents in today s wars." - International Journal of African Historical Studies

"Wlodarczyk has built on the by-now considerable body of work on the importance of belief systems in African politics to offer a systematic analysis of the role of magic in the Sierra Leone conflict. Making good use of the extensive evidence gathered by the trials on war crimes and her own field research, she provides a detailed account of the origins, organization and behaviour of the Kamajor militias that formed the core of the so-called Civil Defence Forces, which fought the rebel Revolutionary United Front. This book is a perceptive analysis of the nature of violence in contemporary Africa, which has relevance well beyond the continent. And it reinforces the argument that it is impossible plausibly to interpret political events in settings different from ours without an understanding of the cultural context within which they take place." - Patrick Chabal, International Affairs

"Researchers who specialize in military studies are a pretty hard-headed bunch, unlikely to spend much time thinking about the worlds of spirits. If they read this book, as they should, theymay start to do otherwise. Wlodarczyck s achievement is to show the relevance of spiritual matters for military and political affairs in many parts of the world, concentrating on Sierra Leone. I hope this book will alert many people to an aspect of warfare that is likely to grow in importance." - Stephen Ellis, Desmond Tutu Professor in the Faculty of Social Sciences, Vrije Universiteit Amsterdam

"Nathalie Wlodarczyk has done a stunning job bringing the immensely complicated, sensitive and intriguing subject of magic to the academic field. From a sound theoretical base, this book brings empirical research and meticulous insight into Sierra Leone s war and its Kamajor fighters. Magic and Warfare combines a fascinating intellectual adventure with an engaging clarity that steers the reader to a greater understanding not only of the Kamajors and the war, but of the nature of belief and its relationship with action." - Zoe Marriage, Senior Lecturer in Development Studies, School of Oriental and African Studies, University of London