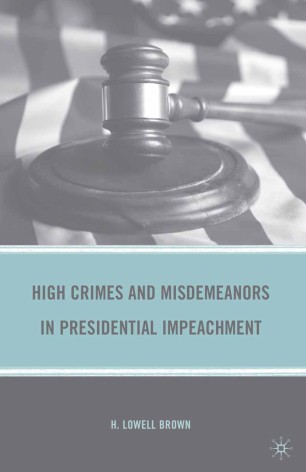 US Constitution states that the President is subject to removal from office upon impeachment and conviction of treason, bribery and 'other high Crimes and Misdemeanors.' In this book, Brown examines history behind this clause as well as the impeachments of Presidents Johnson, Nixon and Clinton.

H. LOWELL BROWN is an attorney whose practice focuses on compliance. Mr. Brown advises clients on implementing programs of compliance and conducts investigations into possible violations of law or company policy. Mr. Brown has also been appointed as special compliance monitor for the Raytheon Company and the DIRECTV Group to oversee their compliance with the requirements of consent agreements entered into with the U.S. Government. In addition, Mr. Brown has been engaged by the trustees of a prominent private college to investigate possible mismanagement by the college's president and to advise the board on enhanced controls.

From 1991 through 2000, Mr. Brown was Assistant General Counsel of Northrop Grumman Corporation where he advised the company and its board of directors on matters of compliance, including compliance with the Foreign Corrupt Practices Act. While at Northrop, Mr. Brown was responsible for internal corporate investigations and for representing the company in governmental investigations.

Mr. Brown began his career as Assistant United States Attorney for the District of Columbia. Mr. Brown also served as Assistant General Counsel of the Commodity Futures Trading Commission. Mr. Brown was in private law practice in Washington, D.C., where he was a partner in the law firm of Heron, Burchette, Ruckert and Rothwell. Since leaving Northrop, Mr. Brown has practiced law in Maine and from 2004 through 2006, Mr. Brown was counsel to the firm of Cadwalader, Wickersham and Taft. Mr. Brown currently serves as a director of two foreign-owned corporations engaged in work for the U.S. Government.

Mr. Brown is a frequent speaker and has written law review and journal articles concerning compliance programs as well as the ethical and legal issues facing corporate counsel in regard to internal investigations. Mr. Brown has written numerous articles on various aspects of compliance with the Foreign Corrupt Practices Act and is the author of a treatise on the Act entitled Bribery in International Commerce, published by Thomson-West.

Mr. Brown is admitted to practice law in California, the District of Columbia and in Maine.

'Brown's book provides the authoritative account of the meaning of high crimes and misdemeanors as it evolved from English and Colonial practice and was applied in presidential impeachments in the United States. Brown provides important insights into what the Founders were thinking when they created the impeachment process and demonstrates how Congress's handling of the famous impeachment cases of Andrew Johnson, Richard Nixon, and Bill Clinton was influenced by and at times departed from the Framers' intentions. The book makes a valuable contribution to the study of the presidency and American political history, and will prove an invaluable guide when the topic of impeachment (almost inevitably) again rises to the top of the public agenda.' - Eric Schickler, Department of Political Science, University of California, Berkeley

'Brown has put together an impressive, extensive analysis of the early history of the impeachment process in Great Britain as well as this country. It is unquestionably one of the most comprehensive, detailed analyses of the legal arguments in the impeachment proceedings against Presidents Nixon, Johnson, and Clinton.' - Michael Gerhardt, author of The Federal Impeachment Process

'A fresh and sharply-focused examination of the grounds for impeachment as defined by the frames of the Constitution and since employed by the Congress, H. Lowell Brown's High Crimes and Misdemeanors in Presidential Impeachment should interest students of the American past and assist those - perish the thought - compelled to deal with presidential impeachment in the future.' - David E. Kyvig, author of The Age of Impeachment: American Constitutional Culture since 1960