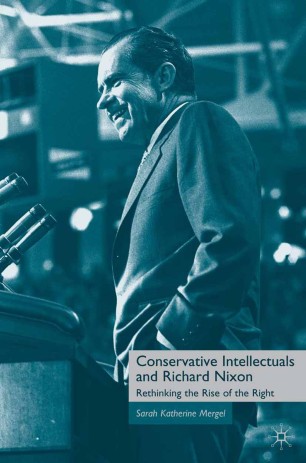 Conservative Intellectuals and Richard Nixon explores the relationship between postwar conservatives and the president from 1968 to 1974. Seemingly casting those years out of their history, conservatives have never fully explored how Richard Nixon affected their movement. They fail to realize the extent his presidency helped refocus their fight against liberalism and communism. Mergel uses the Nixon years as a window into the Right s effort to turn ideology into successful politics. It combines an assessment of Nixon s presidency through the eyes of conservative intellectuals with an attempt to understand what the Right gained from its experience with Nixon.

"A gifted new scholar of the Nixon era, Sarah Mergel gives us the crucial untold story of how the most complex and controversial modern president became both the nemesis and political inspiration of conservatives. It s epic history, from the turbulent inner realities of détente and the Republican seizure of the South to the neocon zenith under George W. Bush. Capturing the essence of politics as power, interests, and ideas, this is indispensable reading for anyone wanting to understand today s America." - Roger Morris, Author of Richard Milhous Nixon: The Rise of an American Politician

"Mergel displays an amazing grasp of the thinking of conservative intellectuals. Through her discussions of the differing views of various right-wing thinkers, she is able to show the complexity of conservatism during these years. Her organization, both of the entire work and the individual chapters, is well thought out and practical. This is an important topic and one that deserves the attention she has given it. In light of Nixon s desire to be taken seriously as an intellectual and because of all of the scholarly attention his ideological pragmatism gets, Mergel has completed an important work here." - Mary C. Brennan, Professor of History, Texas State University-San Marcos