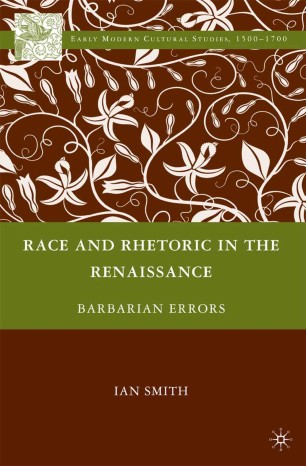 Race and Rhetoric in the Renaissance

This book argues that the sixteenth-century preoccupation with rehabilitating English tells the larger story of an anxious nation redirecting attention away from its own marginal, minority status by racially scapegoating the 'barbarous' African.

IAN SMITH is Associate Professor of English at Lafayette College and has published on early modern drama as well as postcolonial literature.

"In this lively, wide-ranging, and sometimes controversial study, Smith achieves the signal feat of breathing new life into the extended debate about the understanding of race in Shakespeare s England. His book is particularly illuminating in its account of how the Renaissance absorbed and adapted classical ideas of otherness, and in its exploration of the part played by language and the rhetorical tradition in early modern constructions of savagery and barbarism." - Michael Neill, Emeritus Professor, University of Auckland and editor of The Oxford Shakespeare Othello

"Smith's Race and Rhetoric in the Renaissance represents an important departure from the emphasis on visual representation in recent studies of race in early modern England. Instead, Smith's focus is on language as the key to racial difference, and that language, literary and otherwise, is at once undergoing remarkable change and invariably indebted to the classical past. Smith compels his readers to recognize that race is not merely a fashionable topic but a key component in Renaissance humanist thought. This bold and innovative study will be essential reading for graduate students and faculty in the field." - Dympna Callaghan, Dean's Professor in the Humanities, Syracuse University and author of Shakespeare Without Women: Representing Gender and Race on the Renaissance Stage