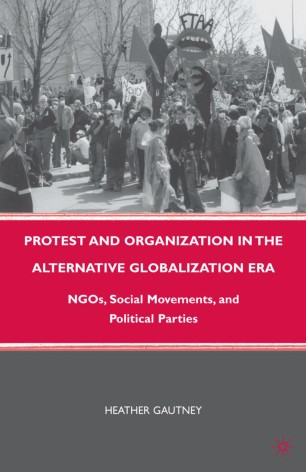 Protest and Organization in the Alternative Globalization Era

This study looks at the ongoing efforts of the Alternative Global Movement and World Social Forum to reconcile contests over political organization among three of the most prominent groups on the contemporary left - social and liberal democratic NGOs, anti-authoritarian (anarchist) social movements, and political parties.

"This book wonderfully captures the great accomplishments of the World Social Forums to bring together the voices of protest against neoliberalism and provide a space of encounter for the various elements of the alternative globalization movements, but it also recognizes the limitations of the social forum process and calls for continuing its project through new structures and forms of organization. This excellent account of our recent past thus also presents an important vision for moving forward." - Michael Hardt, Co-author of Empire, Multitude, and Commonwealth

"Gautney gives us an illuminating portrait of what she calls the alternative globalization movement, embedding vivid empirical descriptions of the movement in an astute account of the historical developments that gave rise to it.Nuanced, intelligent, and well-informed, this book is essential to an understanding of the rise of the most important movement of our time." - Frances Fox Piven, Professor, Graduate School of the City University of New York and Author of Poor People s Movements and Challenging Authority

"A riveting and unvarnished account of the trials and tribulations of the alternative globalization movement as experienced through the history of the World Social Forums. This noble attempt to create an open space in which to discuss how another world might be possible is systematically dissected and analyzed. In the midst of the current global disruptions and the seeming collapse of the neoliberal project, such a movement desperately needs to re-assert its influence and power. Gautney s perceptive analysis of the potential barriers and blockages to so doing therefore deserves the closest attention on the part of all of those who are frustrated by the thought of a return to capitalism as usual." - David Harvey, Author of A Brief History of Neoliberalism