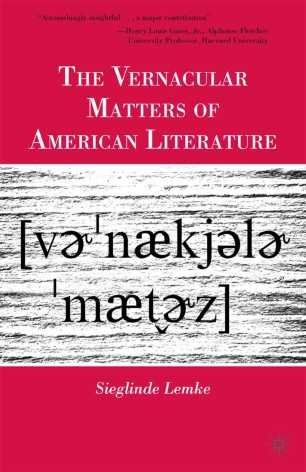 The Vernacular Matters of American Literature

From this study of Mark Twain, Zora Neale Hurston, and Ana Castillo arises a new model for analyzing American literature that highlights commonalities - one in which colloquial and lyrical style and content speak out against oppression.

SIEGLINDE LEMKE is Professor of American Literature and Cultural Studies at the University of Freiburg, Germany.

"Lemke's Vernacular Matters is an astonishingly insightful contribution to our understanding of the relation between vernacular language forms and the canon of American literature. But it also is a signal contribution to a meaningful new definition of how various and rich and multiple the traditions of American literature in fact are today and have always been, at least since Huckleberry Finn. Lemke doesn't merely claim the existence of a comparative American literary tradition; she renders that definition through densely rich and delightfully readable close readings, demonstrating levels of influence across cultures and ethnicities in a manner that is new and refreshing and original. Vernacular Matters is a major contribution to the study of what we should properly call Comparative American Literature, a must read for students and scholars alike." - Henry Louis Gates, Jr., Alphonse Fletcher University Professor, Harvard University

"Lemke has written a subtle and suggestive book that attempts to develop a new direction for American Studies. Her nuanced approach to issues of race, nation, gender and generation results in a challenging and useful appeal to the concept of vernacularization. There is a deep tone of hope and optimism in Lemke's Vernacular Matters." - Homi K. Bhabha, Anne F. Rothenberg Professor of the Humanities, Harvard University

"Vernacular Matters is a truly ground-breaking work. Envisioning a democratic culture from the vantage point of the margins, Vernacular Matters transports readers and critics beyond disciplinary and cultural boundaries and opens up the search for what Lemke tellingly calls vernacular humanism. " - Donald Pease, Director, Futures of American Studies Institute, General Series Editor, New Americanists, and author of The New American Exceptionalism