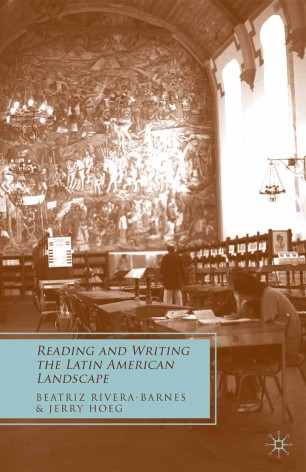 Spanning the whole of Latin America, including Brazil, from its beginnings in 1492 up to the present time, Rivera-Barnes and Hoeg analyze the relationship between literature and the environment in both literary and testimonial texts, asking questions that contribute to the on-going dialogue between the arts and the sciences.

"Rivera-Barnes and Hoeg venture beyond the omnipresent critical considerations of place in Latin American writing to mark both the literature s unique valuation of nature and its ever more strident calls for its conservation. They engage texts from across the centuries, mapping the moral questions they raise as well as offering a 21st-century strategy for finding answers in both the artistic and the scientific realms." - Dale Pratt, Professor of Spanish and Comparative Literature, Brigham Young University

"The landscape offers an opportunity to put the environmental crisis in literary perspective. Rivera-Barnes and Hoeg explore our evolving perceptions and the collection could not be more timely." - Joseph Henry Vogel, University of Puerto Rico-Rio Piedras, and Author of The Economics of the Yasuní-ITT Initiative: Climate Change as if Thermodynamics Mattered

"This is an important contribution to the growing field of ecocriticism in Latin America. The book s broad historical and geographical scope, as well as its careful analysis, make it essential reading for anyone interested in understanding literature and nature in Latin America." - J. Andrew Brown, Washington University in St. Louis, and Author of Test Tube Envy: Science and Power in Argentine Narrative.

"The authors have their feet firmly planted on the ground of solid scholarship. They cut a wide swath, geographically and historically, but are careful to blaze a trail and even to pave the way for readers to follow. Their book is well worth a reader s time, not just for an initial incursion, but for further avid study." - Kevin S. Larsen, Professor of Spanish and Religious Studies, University of Wyoming