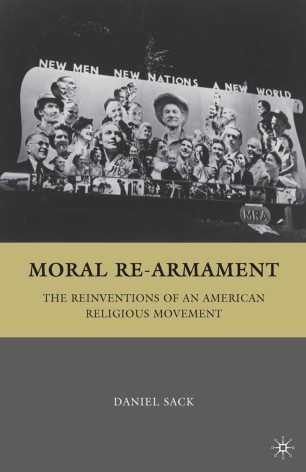 The Reinventions of an American Religious Movement

With its mixture of American evangelicalism, popular psychology and show business, Moral Re-Armament attracted men and women on six continents. This book traces Moral Re-Armament's reinventions over fifty years, from its Ivy League beginnings to its spiritual heirs, Up With People and Alcoholics Anonymous.

DANIEL SACK is a historian of American religion who has taught at Princeton University, Columbia Theological Seminary, and Hope College, USA.

"Hundreds of thousands of people have been influenced, either directly or indirectly, by Moral Re-Armament s beliefs and practices. Until recently, we have lacked a scholarly book that analyzed that controversial, protean, and (at times) astonishing movement. But now we have Daniel Sack s unusually perceptive and beautifully written account of the movement that Frank Buchman founded. The arguments that Sack advances are judicious and persuasive and they are clearly based on years of assiduous research in the primary sources. He has given us a compelling analysis of the personal networks, spiritual practices, fundraising procedures, and media campaigns that gave Moral Re-Armament the capacity to affect the lives of so many people." - David Harrington Watt, Professor of History, Temple University and Author of Bible-Carrying Christians