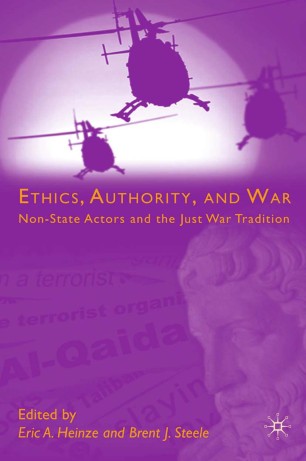 In original essays written by both senior scholars as well as rising younger scholars in the field of international ethics, this volume addresses the ethics of war in an era when non-state actors are playing an increasingly prominent role in armed conflict.


ERIC A. HEINZE is Assistant Professor of Political Science and International Studies at the University of Oklahoma, USA.

BRENT J STEELE is Assistant Professor of Political Science at the University of Kansas, USA.

"The proliferation of non-state actors in the world s war zones is one of the most troubling, and ethically complex, issues confronting the world today.Bringing together many of the best new thinkers on the ethics of war, this important new volume sheds light on the problem, demonstrates its breadth and complexity to the full, and presents a range of different - but equally compelling - perspectives.As such, this book provides much rewarding food for thought and is just what is needed to help us grapple with this thorniest of moral problems." - Alexander Bellamy, Professor of International Relations and Executive Director of the Asia-Pacific Centre for the Responsibility to Protect, University of Queensland, Australia

"The just war tradition is a much-debated topic in international relations and too few works have tried to take seriously its implications for non-state actors. This book goes far towards addressing that yawning gap in the literature, bringing together original, tautly-argued contributions from some of the brightest young scholars in the field. The result is a text that will demand attention from students of international security and the ethics of war at all levels, from undergraduates to experienced academics, for some time to come." - Dr. Ian Hall, Senior Lecturer in International Relations, Griffith University, Brisbane, Australia

"Studies of the just war tradition in recent years have begun to question the extent to which the dominant modern interpretations of the tradition have fore-grounded the state, emphasizing instead the origins of the tradition in non-state based political forms and questions. Now Heinze and Steele have added a further dimension into this process of rethinking; elaborating on the role that non-state actors do play, can play, and should play in the tradition. With excellent contributions from a group of largely younger scholars, this is a book that deserves to be widely read, and should be in the library of anyone who wants to think seriously about the ethics of force in the modern world" - Nicholas Rengger, Professor of Political Theory and International Relations, University of St Andrews