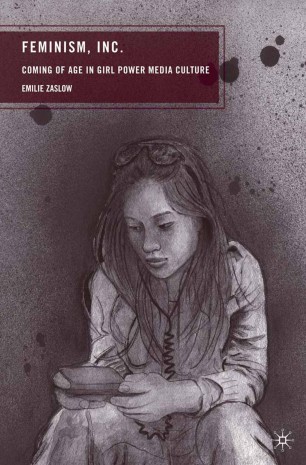 Drawing on extensive research with a diverse group of seventy teen girls, Zaslow offers a critical account of the girl power moment in which feminism and femininity are shrink-wrapped together in one market-friendly package. With a focus on pop-music and television, Zaslow skillfully explores the negotiative processes of teen girls as they make sense of girl power's new cultural narratives of femininity as well as its failure to offer strategies for real social change.  Written in highly accessible language, this book charts new territory as it offers a rich account of the ways in which teen girls understand style, sexuality, motherhood, and feminism in girl power media culture, and how their desires, social experiences, and imaginings of the future are shaped in their relationship with a neoliberal girl power discourse.

"What distinguishes Feminism Inc. from prior discussions of girl power is Zaslow s focus on how girls react to media rather than a close analysis of that media . . .It is the voices of these teens that compel the reader." - Ms. Magazine

"Emilie Zaslow has produced an important and long overdue book in Feminism, Inc. Unpacking the assumption that today s teens have rejected feminism and its ideals outright, Zaslow finds that in fact, feminism is as vital for young women today as it ever was for their mothers and grandmothers. Based on an exhaustive analysis of the values and words of young women, as well as on an intensive analysis of their mediated cultural and social environments, Zaslow produces a tour-de-force that persuasively argues that young women are able to critically appraise their social and cultural environment along paths blazed by the feminists who have gone before. Essential reading for everyone interested in the future of women." - Andrea Lee Press, Professor of Sociology and Professor and Chair of Media Studies at the University of Virginia

"Feminism, Inc. is an important, much-needed, lively read for all those concerned with the well-being of today s girls and the future of gender equity.By skillfully securing a place for diverse teen-girl voices in a theoretically grounded and extensively researched book, Emilie Zaslow reminds us that girl power culture, while perhaps facilitating individual empowerment, does little to teach girls about the power of solidarity and collective action needed for structural social change." - Dafna Lemish, Professor of Communication at Tel Aviv University; Editor of the Journal of Children and Media

"Feminism, Inc.'s greatest strength is the inclusion of interview and focus group data with the girls. By taking this study beyond a content analysis of girl power discourse in the media and examining the intersection of those ideas and how girls make sense of them, the processes behind the girls' conceptualization become visible. . . .This book is accessible for students at the undergraduate and gradate level and would be of particular interest in sociology, communication, and women's studies classes. While Zaslow could have found herself caught up solely in a discussion of media, as the amount aimed at teenage girls is almost endless, she maintains a clear focus on how the girls understand and interact with media." - Christina Panagakis, University of Buffalo, SUNY, in Gender& Society