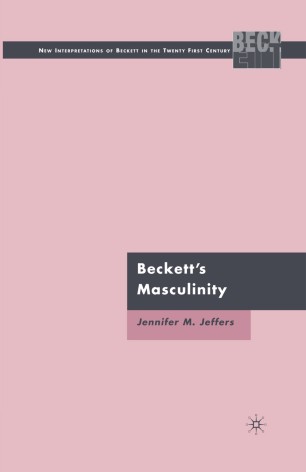 This is the first book to focus on masculinity in Samuel Beckett's work as a way to understand his historical and national context, the difficulty of reading and interpreting his texts, and his ruthless disintegration of sexual and gendered norms throughout his oeuvre.

"Jeffers' Beckett's Masculinity makes a significant and original contribution to criticism on Beckett in advancing the argument that his subversion of traditional gender roles reflects Beckett's own sexual and cultural trauma." - Tony Bradley, co-editor of Gender and Sexuality in Modern Ireland.

"Jeffers makes a major contribution to this progressive re-evaluation of Beckett and his work by illustrating how he struggled to represent the collapsing identity of a specific kind of man in the wake of what Beckett experienced as a catastrophic shift in power after the Irish War of Independence. By re-reading his work in terms of his struggle to negotiate the irreversible loss of patriarchal privilege he had been raised to assume as a given, Jeffers connects Beckett's work with the exciting field of Masculinity Studies; perhaps more importantly, however, she re-positions his texts as valuable artifacts in the analysis of twentieth century Irish history, politics, and culture." - Stephen John Dilks, Associate Professor of English and Irish Literature, University of Missouri-Kansas City

"Among the high points of this volume is its consideration of the importance of Beckett's brother Frank's illness in understanding works like Endgame, in which Hamm often obsesses about the timing and taking of his painkillers and other aspects of being cared for." -History and Psyche