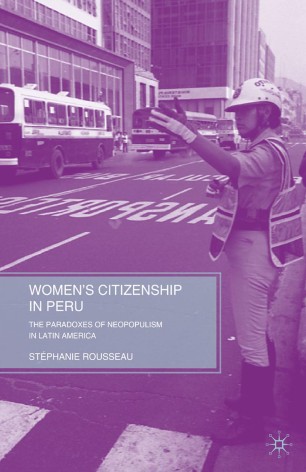 The Paradoxes of Neopopulism in Latin America

This book considers neopopulism as a central issue to understand patterns of women's citizenship construction in many countries of contemporary Latin America. It also explains the paradoxes entailed for women's participation and citizenship rights.

"In Women's Citizenship in Peru, Stéphanie Rousseau has made an original and important contribution to the study of Third Wave Democratization in Latin America. She brings political theory and gender analysis to the understanding of Peruvian neo-populism and analyzes its implications for women's rights and citizenship. Essential reading for students of Latin America, gender studies, and comparative politics." - Maxine Molyneux, Professor of Sociology, Institute for the Study of the Americas, University of London

"Studies of populism in contemporary Latin America have rarely explored the role of gender in the relationships forged between leaders and mass constituencies. Rousseau helps correct this oversight in her penetrating analysis of women s movements and their contradictory relationships with the Fujimori regime in Peru. The work demonstrates how diverse feminist and community-based women s groups struggled to advance gendered citizenship rights and meet consumption needs, at the same time that the Fujimori regime sought to co-opt these groups and undermine their political autonomy. This study is a major contribution to scholarly understanding of the opportunities and challenges encountered by women s movements that seek to strengthen democratic citizenship in Latin America today." - Kenneth Roberts, Professor, Department of Government, Cornell University