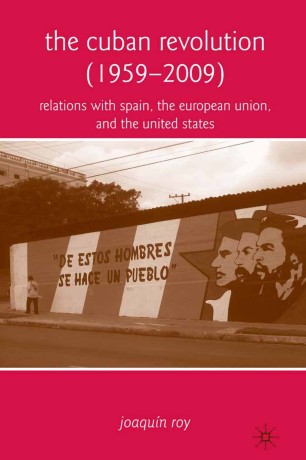 Relations with Spain, the European Union, and the United States

Fifty years after the triumph of the Cuban Revolution and the establishment of a Marxist-Leninist regime in Cuba, the two fundamental dimensions of this historical phenomenon are the survival of the system created by Fidel Castro and the policy of the United States to terminate it.


JOAQUÍN ROY is Jean Monnet Professor and Director of the European Union Center at the University of Miami, USA.

"Richly detailed yet lively and engaging, Roy s The Cuban Revolution focuses on the European Union s longstanding ménage à trois with revolutionary Cuba and the United States. Drawing upon decades of painstaking research, Roy provides much more than a useful chronicle of the evolution of E.U. policy; he also offers a cogent explanation of Europe s principled thinking on issues ranging from self-determination and non-intervention to promoting democracy and human rights - thinking that almost inevitably clashes with policies coming from both Washington and Havana. Highly recommended." - Lars Schoultz, Author of That Infernal Little Cuban Republic: The United States and the Cuban Revolution

"I have read Roy´s work for many years, and regard him as the specialist on Cuba-Spain and Cuba-European Union relations. This book is a sweeping analysis of Cuban relations with the European Union. It is a work that is extremely timely, particularly in light of changes in the Cuban government since Raúl Castro took the helm. There have been important changes since then, and these will continue. In that context, the connections with the European Union will become increasingly important - and Roy is the person to build upon his detailed historical analysis and offer plausible scenarios. The greatest strength of the book is that nobody has done this before and nobody is better placed than Joaquín Roy to deal with this material." - John M. Kirk, Professor of Spanish, Dalhousie University