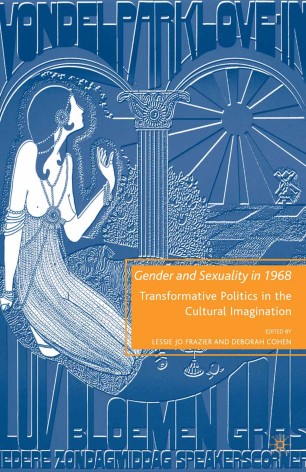 Gender and Sexuality in 1968

Transformative Politics in the Cultural Imagination

This unique volume brings together literary critics, historians, and anthropologists from around the world to offer new understandings of gender and sexuality as they were redefined during the upheaval of 1968.

"1968 is one of the most fiercely debated and misunderstood transformative years in global history. This extraordinarycollection takes us out of our comfort zones and brilliantly shifts the terms of discussion away from the cheerful celebration of sex, drugs, and rock-n-roll to the more terrifying and painful stories of brutal repression, agonized shame, and conflicted aspirations. It decenters the typical western tales told about 1968 by bringing in the vantage points of Havana, Mexico City, Prague, and Dakar, while offering utterly fresh accounts of developments in Paris and San Francisco as well. The beaten, burning, and yearning bodies evoked here withsensitivity and rigor change how we think about the intricate interconnections between emotions and politics." - Dagmar Herzog, author of Sex in Crisis: The New Sexual Revolution and the Future of American Politics

"1968, like 1789 and 1848, is a watershed year in the history of revolutionary movements, one whose events reshape everything that follows. Drawing on archival research, close readings of texts and images, and political analysis to reframe these events in a comparative global context, and foregrounding the hitherto neglected significance of gender and sexuality, Frazier and Cohen s new interdisciplinary collection proposes major revisions in how we think about 1968 and what has come since." - Andrew Hoberek, University of Missouri-Columbia

"Frazier and Cohen's collection considers the centrality of gender and sexuality in a year of global political ferment.Essays on events and social movements in Africa, Europe, and the Americas challenge conventional scholarship, raise new questions, and provoke new directions in our thinking about why 1968 mattered then, and why it still does today."-Lisa Duggan, author of Twilight of Equality: Neoliberalism, Cultural Politics and the Attack on Democracy