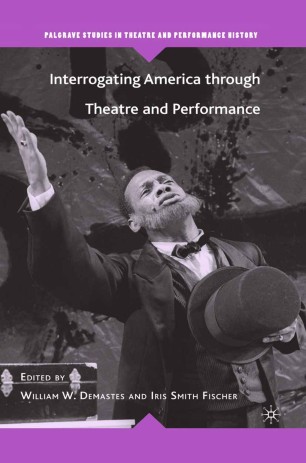 Interrogating America through Theatre and Performance

This collection of essays dissects American plays, movies and other performance types that examine America and its history and culture. From Amerindian stage performances to AIDS and post-9/11 America, it displays the various and important ways theatre and performance studies have examined and conversed with American culture and history.

'DeMastes (Louisiana State Univ., Baton Rouge) and Fischer (Univ. of Kansas) have assembled an impressive collection of essays intended to answer this question: "Precisely what is, has been, or should be, the purpose of American drama and its relationship to the political and cultural life of America?" Those familiar with scholarship on American theater will recognize contributors Rosemarie Bank, Christopher Bigsby, and Janet Haedicke and welcome the contributions of such budding scholars as Anne Fletcher, Amy Hughes, and Ladrica Menson-Furr. One of the real strengths of the volume, other than the impressive nature of the writing and scholarship, is the link the essays create between drama and the changing currents in American politics and popular culture. The essays cover American theater from Native American performances, the slavery issue in the period before the Civil War, and immigration and the melting pot to Arthur Miller and Tennessee Williams, African American drama, and the post-9/11 world. The book is an excellent reminder that the meaning of being an American changes, just as does literature the country produces. This welcome book should pave the way for future scholarship along these same lines. Summing Up: Highly recommended. All readers; all levels.' - Choice

'Interrogating America is a wide-ranging and impressive collection of essays, one reminding us of the varied theatrical languages that contribute to the rhetoric of nationhood. Demastes and Fischer have assembled a balanced volume, one that features a number of veteran American drama scholars as well as some newer voices who, together, engage in important debates regarding the scope and range of American theater. This is a welcome addition to the field.' - Matthew Roudané, Professor and Chair, Department of English, Georgia State University, USA

'As Americans, we think we know who we are, yet the theatre magnifies some aspects of identity or reveals little-suspected complexities. These essays examine both our theatre and our dramatic literature, sampling an impressive range of material while managing nicely to stay focused on the central issue: how have we defined ourselves in the past and who are we now? The responses by these stellar scholars abound with fresh insights and observations that ring true.' - Felicia Hardison Londré, Curators' Professor of Theatre, University of Missouri-Kansas City, USA