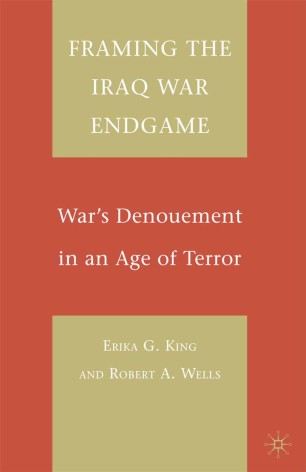 War’s Denouement in an Age of Terror

The Bush administration was remarkably successful in dominating the debate over why we had to go to war with Iraq, but it would soon be faced with the more daunting task of winning the monumental rhetorical struggle over how to write the script of the Iraq War endgame. We examine the twists and turns of the discursive battle over the war's denouement as it played out against the backdrop of the war on terror, and we conclude that while Bush failed to win the argument that Iraq was one with our fight against terrorism, his underlying worldview that we must confront terrorist evil through global military engagement remains an important component of Obama adminstration rhetoric.

"George W. Bush, the longest-serving wartime commander in chief in U.S. history, fought a remarkable rhetorical war after 9/11. In Framing the Iraq War Endgame, Erika King and Robert Wells analyze the administration's controversial discourse over Iraq. Their insights reveal much about the way Americans deliberate over global conflicts, foreign policy, the presidency, and ultimately our values as a people. This study deserves a prominent place on bookshelves inside and outside the Beltway." - Gleaves Whitney, Director, Hauenstein Center for Presidential Studies Grand Valley State University

"This is a timely and significant work on the paradoxes of defining terrorism as a military problem. Unlike many of America's past conflicts, the Iraq War has been framed within a set of ideological narratives surrounding sub-national conflict. King and Wells identify the nature of these narratives and thoroughly examine their impact on competing policy positions. The Iraqi conflict developed within the context of a nebulous, controversial political position - a belief that the United States could declare war on a concept: terrorism. This book explicates the complexities of victory and defeat in a shadow war. Few have defined the problem so well." - Jonathan R. White, author of Terrorism and Homeland Security

'Through an examination of presidential speeches, elite media coverage, and congressional hearings and debates, the authors provide detailed documentation of the persistence and success of the 'war on terror' rhetoric over time. In fact, they show that this discursive frame was impervious to criticism.' Presidential Studies Quarterly