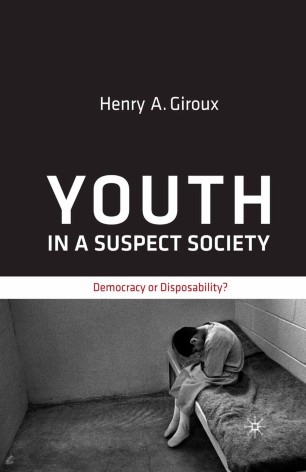 Youth in a Suspect Society: Democracy or Disposability?

Through the lens of education, this book attempts to situate young people within a number of theoretical and political considerations that offer up a new 'analytic of youth', one that posits not only the emergence of a new way to talk about youth but also a new language for understanding the politics that increasing frame their lives.

'Henry Giroux is one of the most important public servants the last 100 years have produced. Youth in a Suspect Society is an unnerving prophetic call to action. Through tedious research and meditation, Giroux has provided a blueprint that all concerned can use in restoring the faith Youth once had in society faith planted in the soils of non-privatized, non-corporatized values. I recommend it with inestimable gratitude to Dr. Giroux for his moral vigor and matchless vitality.' - Tolu Olorunda, The Black Commentator

'Giroux continues to write eloquently about the damage that is being done to our children - and our societies - under the changing regimes of capitalism and power. With an astute pedagogical perspective, and the unique ability to translate the densest theoretical concepts into incisive (or perceptive) cultural analyses, this book forces us to think beyond the assumptions that too often define the political common sense.' - Lawrence Grossberg, Director of the University Program in Cultural Studies, University of North Carolina, USA

'Nobody writing on significant social issues matches Giroux's analysis and eloquent plea on behalf of youth. This book is more than a study of a social group. In the context of addressing how our country treats its young, Giroux has provided us with a scorching critique of the conventional claim that we are a civilized and democratic society. At the same time, it is a clarion call to citizens to reverse policies and practices that endanger their future by denying youth the bright sunlight of freedom.' - Stanley Aronowitz, Author of Against Schooling: For an Education that Matters

'There is great urgency in Giroux's powerful new book. Yet his arguments are made with careful documentation and analysis. The result throughout is an unrelenting refusal to back away from the alarming fact that the combined demonization of youth and of education now threaten the essential ability of a society to develop critical thinking or the capacity to create an imaginary of the future. Giroux has written an essential book laying out the inheritance of the 20th Century as well as the challenges for the 21st. - Carol Becker, Professor of the Arts and Dean of the School of the Arts, Columbia University, USA; Author of Thinking in Place: Art, Action, and Cultural Production

'Giroux's remains the singular critical voice about the closing off of democratic political, social, and economic prospects for non-privileged youth in America. In Youth in a Suspect Society, Giroux turns the tables, placing pressure where it belongs, on the delimiting social conditions that turn kids into 'problems' rather than on 'problem kids.' This, importantly, is a book about the renewal of democracy as much for the generation produced by our generation as for our own.' - David Theo Goldberg, Director, Humanities Research Institute, and Professor of Comparative Literature and Criminology, Law and Society, University of California-Irvine, USA

'In this book, Giroux continues his valuable explorations of the diverse ways in which young people are badly positioned in contemporary U.S. society. Giroux documents a number of scandalous treatments of youth by our schools, media, police, state, and corporations and brings to light social injustices that must be addressed and ameliorated. Well-researched, written, and highly informative, this is a book that all concerned with the prospects and future of our youth should read and discuss.' - Douglas Kellner, Author of Guys and Guns Amok: Domestic Terrorism and School Shootings from the Oklahoma City Bombings to the Virginia Tech Massacre