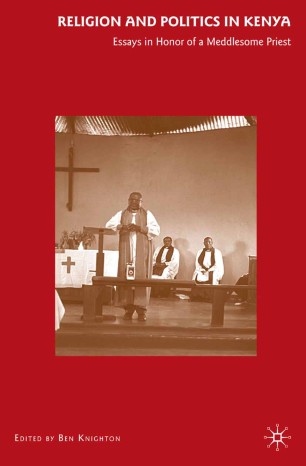 Religion and Politics in Kenya

Essays in Honor of a Meddlesome Priest

Ben Knighton teaches African religions in the African Studies Centre at Oxford. Besides journal articles and chapters in collected volumes, he has published a monograph entitled The Vitality of Karamojong Religion: Dying tradition or living faith?

"Ben Knighton's edited volume is an interesting, important, and timely book which marks one of the few concerted efforts to interrogate the complex and ambiguous relationship between religion and politics in Kenya." - African Affairs

"A rich volume full of original insight. This book is a genuinely valuable and necessary contribution to the study of Kenya, and indeed religion and politics in Africa." - Africa

"Without drawing sharp distinctions between winners and losers in Kenyan politics, this interesting book does sketch out the critically important work of Archbishop Gitari in opposing corruption during the presidency of Daniel arap Moi, and in establishing an independent, influential - and continuing - voice for the Anglican Church." - The Living Church

"This book provides scholars from a variety of backgrounds and approaches a series of essays on David Gitari and broader issues of religious actors' role in Kenyan politics." - The Round Table: The Commonwealth Journal of International Affairs

'A highly qualified cast of Kenyan and Kenyanist writers have contributed to a volume of essays which provides a solid exploration of Kenyan politics in the 1980s-2000s. The book deserves attention from students of East African history and politics because of the way in which exposes the religious dimensions of politics: this is a context in which politics and religion are thoroughly mixed, despite the efforts of some to enforce a breach between them.' Mission Studies

"This is an enormously interesting and relevant study by scholars of the highest calibre of the religious dimension to modern Kenyan politics and should prompt those who specalize in politics in Africa as a whole to look more attentively and with greater seriousness than is usually the case at the significance of the religious factor in the political processes of the continent." - Peter B Clarke, Professor of the History and Sociology of Religion, University of Oxford

"Essential reading for anyone who wishes to understand the ubiquitous, multifaceted, and contradictory roles religion plays in modern Kenyan politics, ranging from complicity to prophetic opposition to political patrimonialism, corruption, and incitement of ethnic violence." - Thomas Spear, Professor Emeritus of History at the University of Wisconsin-Madison

"This impressive collection of essays written by "champion league" scholars fills a gap in our knowledge of the religious impulse in Kenyan politics and the overall complexity of the relationship between religion and politics. With Archbishop Gitari as our guide we learn how the churches have moved from a prophetic and critical ministry during the Moi era to their much more accommodating attitude during the Kibaki years culminating in their compromised role during the 2007/08 electoral crisis." - Holger Bernt Hansen, Professor in African Studies, University of Copenhagen

"Christianity claims perhaps 80 per cent of Kenya's population and frequently provides the grammar of the nation's political discourse. Yet Kenya's post-independent history has been dogged by governmental corruption and more recently by shocking ethnic violence. This thought-provoking collection of essays in honour of Archbishop David Gitari uncovers the ambiguous relationship between these two facets of modern Kenyan history, showing how Christians have been too often politically indifferent or easily manipulated, and yet on occasion also extraordinarily courageous. It deserves a wide readership and deep reflection." - Brian Stanley, Professor of World Christianity, University of Edinburgh

"[T]his book provides scholars from a variety of backgrounds and approaches a series of essays on David Gitari and broader issues of religious actors' role in Kenyan politics." - Stephen Brown, School of Political Studies, University of Ottawa, Canada