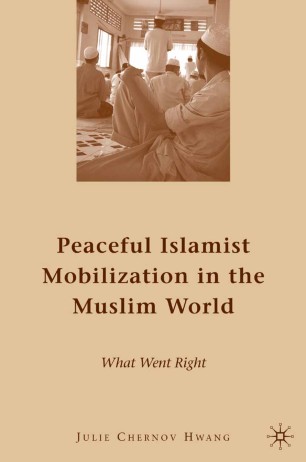 In Peaceful Islamist Mobilization in the Muslim World: What Went Right , Julie Chernov Hwang presents a compelling and innovative new theory and framework for examining the variation in Islamist mobilization strategies in Muslim Asia and the Middle East.

'Hwang's book is a welcome life jacket amid a sea cluttered with ill-informed volumes written by instant experts on terrorism that often magnify the symptoms but are blissfully ignorant about the cause. . . . Unlike many studies that seek to explain the roots of violence in political repression of a lawless state and a sense of powerlessness and humiliation stemming from foreign occupation, Hwang shifts the attention to the positive role the state can play in promoting nonviolent strategies of mobilization and empowerment among Muslim groups. Summing Up: Recommended. All undergraduate, graduate, and research collections.' - Choice

'In this book, Julie Chernov Hwang addresses a very important puzzle in the study of Islamist mobilization. Why do some groups pursue Islamist goals peacefully, through established channels of political participation, while others choose violence? By including a broad range of cases outside of the Middle East, she paints a nuanced picture of Islamist mobilization that shows great diversity of forms, including through democratic means. She offers an important corrective that shifts the debate away from the narrower focus on violent mobilization that has dominated the study of Islamist groups. Hwang usefully refocuses our attention on the role of state institutions and channels of participation through a careful examination of several detailed cases. It is a fine example of focused comparative analysis that opens up new directions of inquiry and provides useful new insights on the study of this important question.' - Jacques Bertrand, Associate Professor of Political Science, University of Toronto, Canada

'At a time when many observers in the United States and in Western Europe judge that the association between radical Islam and violence is a foregone conclusion, Hwang, by focusing on case studies, demonstrates cogently that Islamists may employ peaceful mobilization strategies and reject violence depending on opportunities for expressing themselves through political participation, the effectiveness of the state as regards law enforcement, and provision of social and educational services as well as the influence of external factors. Islamic radicalism and violence, it appears, are not inextricably linked. A very timely piece of work that is essential reading not only for scholars studying Islam and politics but also policymakers and diplomats who have to deal with societies with substantially Muslim populations.' - Ilter Turan, Istanbul Bilgi University, Turkey

'Since 9/11 much discussion has centered only in the rise of radical and violent political Islam in certain parts of the globe. There has been little discourse on peaceful Islamic mobilization that has been continuing to gain momentum in many parts of the Muslim world in the last two decades at least. This can clearly be seen in the dynamics of Islam in the three countries studied by Hwang - Indonesia, Malaysia, and Turkey. The fact that these countries are the least arabicized in the Muslim world provides strong evidence that Islam and Muslim are far from monolithic. Using a comparative approach, she has been very successful to uncover distinctive peaceful Islamic mobilization in each country that is in turn very crucial for the future of Islam and the Muslim world confronting the age of globalization. No doubt this book will enrich the readers with a better grasp of Islamic dynamics in the present days.' - Azyumardi Azra, Professor of History, Director of Graduate School, State Islamic University, Jakarta, Indonesia, and member of Council on Faith, World Economic Forum, Davos, Switzerland

'In this fine comparative study, Hwang provides a timely and important account of the synergy between state capacity, institutional inclusivity, and Islamist mobilization. In so doing, she posits a compelling explanation for the predominantly peaceful nature of political mobilization in Muslim societies. Equally significant is the fact that Peaceful Islamist Mobilization in the Muslim World achieves this by shifting the terms of reference away from the Islamic 'heartland' and introducing readers to non-Arab contexts and narratives. This book is impressive both in its empirical depth, conceptual scope, and analytical rigor, and is a must-read for all who are interested in obtaining a deeper appreciation of social and political trends in the non-Arab Muslim world.' - Joseph Chinyong Liow, Associate Dean and Associate Professor, S. Rajaratnam School of International Studies, Nanyang Technological University, Singapore