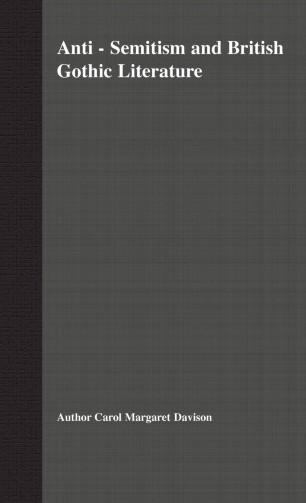 Anti-Semitism and British Gothic Literature examines the Gothic's engagement with the Jewish Question and British national identity over the course of a century. Beginning with an exploration of Jewish demonology from the Middle Ages to the Enlightenment, Davison interprets the changing significance of the trans-national Wandering Jew in classic Gothic fiction who later migrates into Victorian realism. What emerges is the elucidation of an anti-Semitic 'spectropoetics' that convey how the spectres of Jewish difference and Jewish assimilation haunt British literature.

CAROL MARGARET DAVISON is Acting Director of Women's Studies and Assistant Professor of English Literature at the University of Windsor, Canada. She has authored numerous articles on women's writing, Gothic, Victorian, postcolonial and African-American literature, and is the editor of the award-winning study, Bram Stoker's Dracula: Sucking Through the Century, 1897-1997. She is currently working on a monograph on the Scottish Gothic literary tradition.