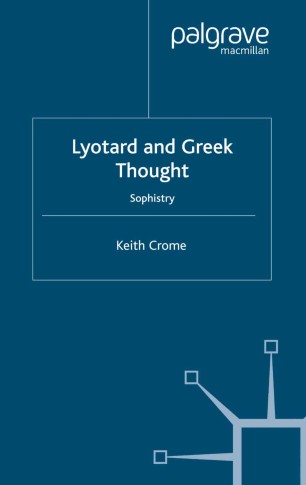 In this original study, Keith Crome argues for the importance of Lyotard's analyzes of sophistry. In the first section, the author examines the accounts of sophistry given in the works of Plato, Hegel and Heidegger. Sensitive to the important differences between them Keith Crome nevertheless establishes their fundamental identity. In the second section, the book shows the radicality of Lyotard's analyzes in contrast to such traditional views. It examines Lyotard's complex and original readings of sophistical arguments, and offers a new interpretation of The Differend .

KEITH CROME is Teaching Fellow in Philosophy at Manchester Metropolitan University, UK. He has published work on Greek philosophy and on Lyotard.