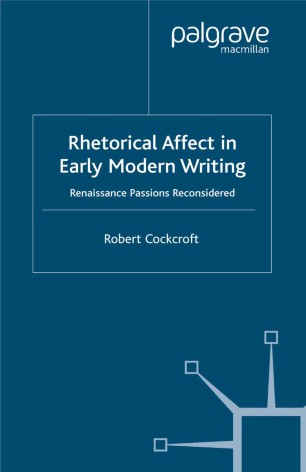 Emotive language is now best understood by combining the analytic techniques of classical rhetoric with current linguistic practices. With or without prompting, the 'passions' of Renaissance culture can stir contrary feelings in today's readers, which are enlisted to validate a range of theorised responses. This book will mediate between critics, readers, the author and the original audience, using the 'New Rhetoric' to open fresh perspectives on writers as diverse as Christopher Marlowe, Lucy Hutchinson and Margaret Cavendish.

ROBERT COCKCROFT was born into a textile family and is particularly interested in the structure and texture of language, aesthetic and persuasive. As co-author of Persuading People (1992), he now seeks to combine 'New Rhetorical' linguistic insights with traditional perspectives, in an innovative treatment of Renaissance texts and their modern critics.

'densely written, but lucidly, and cogently, its carefully plotted sentences encouraging the reader to 'hang in there' and hang in he does, until the argument becomes irresistible. Its capacity to instruct and please (classical style) or empower (modern style) is hardly to be overstated. And its merit extends beyond its skilled and detailed exposition of some writers in whose work Dr Cockcroft clearly takes great pleasure...The demonstration of the arts of feeling and counter-feeling in canonical texts has its relevance to the less distinguished artefacts or our own time: to the skills od publicity and advertisement, to the parliamentary debate and political speech, to the broadsheet editorial, to the sermon, to the moral lessons of the soap opera. And this broad potential in the handling of an ostensibly narrow subject is not the least of the virtues that makes this one bobby-dazzler of a book, and no mistake.' - Walter Nash, Emeritus Professor of Modern English Language, University of Nottingham

'...interesting and thought-provoking...In every case he impressively demonstrates how the critic uses ethos and logos to generate a persuasive pathos.' - Peter Crisp, Chinese University of Hong Kong, Language and Literature